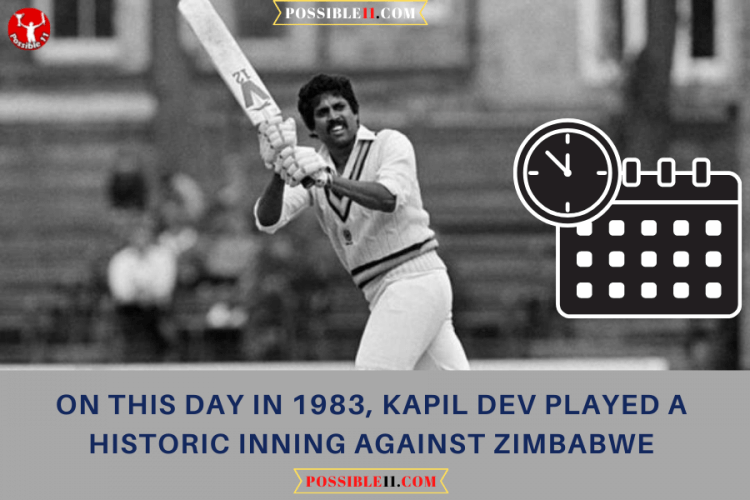 On this day in 1983, Kapil Dev played a historic inning against Zimbabwe, Which is the biggest contributor to Indias World Cup victory.

18 June 1983, on this day when Captain Kapil Dev laid the foundation to change history. In the match against Zimbabwe, when Team India was struggling after losing 5 wickets at the score of 19 runs at one time, Kapil Dev played an unbeaten 175 and took the teams score to 266. He hit 16 fours and 6 sixes in this innings of 175 runs and the rest of the teamAssured the players that they have come here to win the World Cup

The condition of the team in that match against Zimbabwe can be gauged from the fact that the teams star batsmen Sunil Gavaskar and Srikanth were dismissed without opening an account. This did not stop the failure of the batsmen, apart from these, Mohinder Amarnaths 5 runs, Sandeep Patil 1, and Yashpal Sharma were in the pavilion scoring only 9 runs.

At one point the teams score was 7 wickets for 78 runs. Kapil Dev was looking for a partner who would support him and it was either Madan Lal, he first added 62 runs with him and then shared a 126-run partnership with Syed Kirmani to take the team to a respectable score of 266. . During this, Kapil completed his century in only 72 balls.

He remained unbeaten on 175. After that Team India did not look back and first defeated Australia by 118 runs. Beating England by 6 wickets in the semi-finals and then creating history by defeating everyones favorite West Indies on 25 June.

Talking about the match, the Indian team scored 266 runs for the loss of 8 wickets due to Kapil Devs innings and won by 31 runs after bowling out Zimbabwe for 235 runs.

BBC was on a HOLIDAY, BBC, the official broadcasters of the game, did not broadcast the game with India vs Zimbabwe being one of the four games being played on the day. There exists no footage of Kapil Dev’s innings as the game had no coverage whatsoever. It remains one of the only World Cup matches to have not been telecasted.