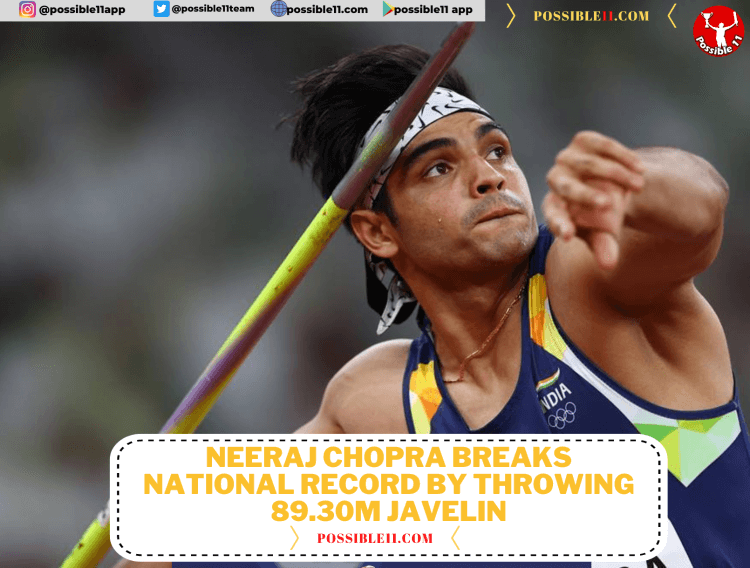 Neeraj Chopra, who created history by winning the gold medal in Tokyo Olympics, has made a new record in Javelin Throw. Neeraj broke the national record in the match played in Finland on Tuesday. However, in spite of this, he had to be content with silver, not gold, in this tournament. Finnish athlete Olivir Helander took the gold with a throw of 89.93 meters

Neeraj had entered the field for the first time in a competitive match after the Olympics held in Japan last year. He threw a throw of 89.30 meters during the match played at the Pavo Nurmi Games in Finland. During the Tokyo Olympics, he threw a throw of 87.58 meters. On Tuesday, he broke his own old record. Neeraj Chopra threw a throw of 86.92 meters in his first attempt. After this, in the third, fourth, and fifth attempts, he could not throw more than 85.85 meters despite many efforts.

This was Neerajs first tournament after 10 months and he threw 89.30 in his second attempt, which became his personal best throw. He had thrown 86.92 meters in the first attempt, while his third, fourth, and fifth attempts were declared invalid. Neeraj finished with a throw of 85.85m in his last attempt. Neeraj may have broken his own national record but finished second behind Olivier Hellander of Finland, to be content with a silver medal. Helander took the top spot with 89.93m.

Neeraj Chopras earlier national record was 88.07m, which he had set in March last year in Patiala. He won the Tokyo Olympic gold medal on August 7, 2021 with a throw of 87.58m.

Olympic Champion Neeraj Chopra settles for a Silver Medal with a New National Record Throw of 89.30m at the Paavo Nurmi Games in Finland.@afi We can see several performance hikes in various events this season. Hope for more further. @Adille1 @Media_SAI @SPORTINGINDIAtw pic.twitter.com/cBLg4Ke8nh

Chopra will take part in next Saturdays Korten Games in Finland, where he currently resides. He will participate in the Stockholm Leg of the Diamond League on 30 June. He trained in the USA and Turkey before relocating to Finland last month. Chopra had recently told the media that he would not put himself under pressure with the idea of ​​throwing beyond 90 meters and would try to climb to the top slowly during the July 15-24 World Championships in Eugene,

Let us tell you that on August 7 last year, javelin thrower Neeraj Chopra secured the first place in the competition by throwing 87.58 meters in the Tokyo Olympics-2020. Before Neeraj, no athlete has been able to achieve this feat in the track and field event. Neeraj Chopra, creating history, raised the heads of crores of Indians with pride by winning the gold medal. Neeraj Chopra had said in an interview that his goal is to throw javelin up to 90 meters. He said that if he can do this then Neeraj will be among the best throwers in the world.