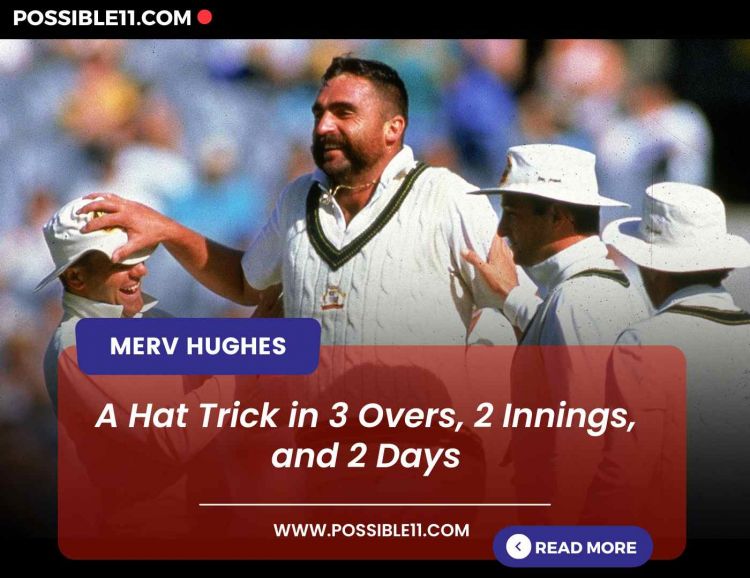 A hat-trick is only considered valid if a bowler picks up three wickets in three consecutive balls bowled during a match. It can be spread over one or two innings of a match, but it does not count if wickets are taken in the Super Over. Except in the unusual case of the batsman being stumped on a wide, no-balls or wide balls will cost the bowler a hat-trick. In such cases, the hat trick is achieved in two or fewer genuine deliveries from a bowler.

To date, only one hat trick in international cricket has occurred across three different overs, and that was achieved by Australias Merv Hughes. The incident occurred on December 5, 1988, during the Perth Test against West Indies, after the visitors had taken a 1-0 lead in the five-match Test series. The West Indies team scored 449 runs in the first innings after being put in to bat. Their captain, Sir Viv Richards, led the charge with a 150-ball 146, hitting 102 boundaries.

How Did Merv Hughes Take Hat-trick in 3 Different Overs?

Courtney Walsh, a West Indian fast bowler, became the first person to bowl a hat trick in two Test innings when he dismissed the last Australian wicket in the first innings and began the second with two-wicket balls. It was the first time in 110 years of Test cricket that a hat trick was split across two innings. Heres the final score for that game.

But the Merv Hughes hat trick a month later was something special, a once-in-a-lifetime occurrence that serves as the basis for our first article in the amazing cricket facts series.

Here’s the full timeline of how Merv took HAT-Trick in 3 different overs:

Tim May, the teams lone spinner, bowled the next over and removed Gus Logie, the 9th West Indian wicket, in that over. The WI score at the end of the 123rd Over was 449/9.

Ball 123.1 Hughes returned to bowl his 37th over and struck Patrick Patterson with the first ball. 449/10 is the final score.

Hughes finished the first innings with a bowling figure of 130/5 in 36.1 overs.

It was then Australias turn to bat. The Australians batted until the final session of the day, with only a few overs remaining.

Ball 0.1: Merv Hughes, who had two wickets in his last two balls of the first innings, came into the bowl the first over of the West Indies second innings. Gordon Greenidge was dismissed with an L.B.W appeal after a quicker delivery directed right at the stumps.

Hughes finished the second innings with 8/87 and finished the match with an impressive 13/217. Nonetheless, the West Indies won the match, with Merv Hughes named Player of the Match.

So Merv Hughes unusual hat-trick was completed not only in three different overs but also in two different innings spread over two days.