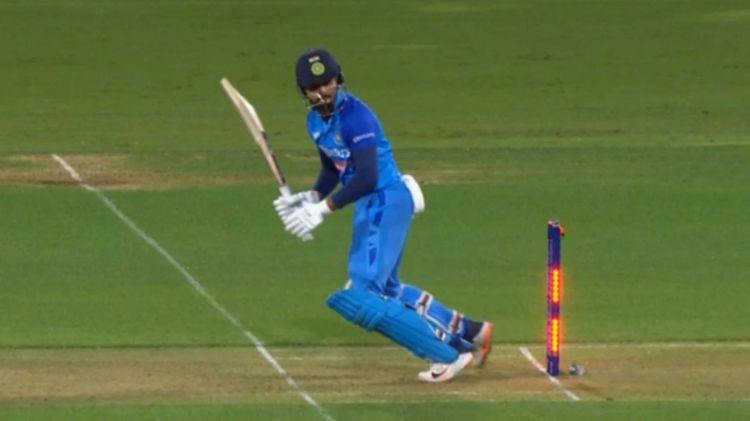 List of Hit Wickets in T20I, Shreyas Iyer became the 25th batsman to be hit wicket in T20I

The second match of the three-match T20 series between India and New Zealand is being played at Mount Maunganui. Shreyas Iyer, who was running in good rhythm in this match, got out hit wicket. When he got out, he had scored 13 runs in nine balls with the help of a four and a six. In the process of playing Loki Fergusons ball on the back foot, his leg went off the wicket.

Shreyas Iyer became the 25th batsman to be hit wicket in T20I, However, then Shreyas did not know and ran to take the run. He realized this when the opposition players celebrated. After that, he could not believe it. He had to return to the pavilion with a heavy heart. Shreyas is the 25th batsman to hit-wicket in T20 Internationals. Also, he is the fourth batsman of India to be dismissed in this way. Harshal Patel, KL Rahul, and Hardik Pandya have hit wickets before them.

Hardik was hit wicket on the last ball against England in the semi-finals of the recently concluded T20 World Cup. Rahul is the first batsman to hit a wicket for India in T20 Internationals. He was dismissed like this off Jeevan Mendis in 2018 against Sri Lanka. At the same time, Harshal Patel also hit a wicket against New Zealand on the same ball as Loki Ferguson.

After this, Suryakumar Yadav and Shreyas Iyer took the innings forward and took Indias score beyond 100. There was a 39-run partnership between the two for the third wicket. After the dismissal of Shreyas, Suryakumar along with captain Hardik Pandya led the innings. Suryakumar, meanwhile, scored his second century in T20 Internationals. He scored a century in 49 balls. Suryakumar played an unbeaten inning of 111 runs in 51 balls. During this, he hit 11 fours and seven sixes. His strike rate was 217.65.

Hardik Pandya 13 runs, Deepak Hooda and Washington Sundar could not even open the account. Tim Southee sent all these three to the pavilion on three consecutive balls and took his second hat-trick of T20 International. He is the second bowler after Sri Lankas Lasith Malinga to take two hat-tricks in T20s. Batting first, India scored 191 runs losing six wickets in 20 overs.

Also Read: BCCI ready for split captaincy? Hardik will be the new captain