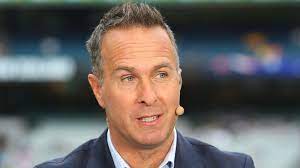 Tom Lathams incredible century and Kane Williamsons unbeaten 94 helped New Zealand beat India by seven wickets as they easily chased down 307 with 17 balls to spare. The hosts didnt get off to the best of starts, but Latham, who usually opens for New Zealand but batted at No. 5 on Friday, combined with the skipper in superb fashion, stitching an unbeaten 221-run stand to put New Zealand ahead in the three-match series. Following the series opener loss in Auckland, former England captain Michael Vaughan launched a scathing attack on captain Shikhar Dhawan and head coach VVS Laxman.

Former England captain Michael Vaughan slammed Team India after it was defeated by New Zealand by seven wickets in the first One-Day International (ODI) at Eden Park in Auckland. Vaughan, who is extremely active on social media, frequently engages in Twitter battles with former India opener Wasim Jaffer. The Englishman has long been a harsh critic of Team Indias strategy, particularly in white-ball cricket.

On Friday, Shikhar Dhawan and company failed to defend a 307-run target against New Zealand. As the Indian bowlers had a forgettable day at Eden Park, Tom Latham smashed an incredible century and skipper Kane Williamson complemented him well with an unbeaten 94-run knock.

After Indias defeat, Jaffer took to Twitter to point out that the visitors blew a crucial opportunity by not fielding a sixth bowler against New Zealand.

“Well played @BLACKCAPS Made 300 look like 270. Williamson all class as always but Latham stole the show. Not easy for an opener to move down the order and still be successful. India missed a trick by just playing 5 bowlers. #NZvIND," Jaffer tweeted.

Well played @BLACKCAPS ?? Made 300 look like 270. Williamson all class as always but Latham stole the show. Not easy for an opener to move down the order and still be successful. India missed a trick by just playing 5 bowlers. #NZvIND pic.twitter.com/bcGnf6K5Ry

Vaughan was quick to respond to Jaffers tweet, which poked fun at Indias ODI team.

They are a dated ODI team - Michael Vaughan

They are a dated ODI team .. you need at least 6 if not 7 bowling options .. https://t.co/UXsgWb2PvN

In fact, the managements decision to go with only five bowling options against a strong team like New Zealand was a surprise, given that the Blackcaps currently lead the ICC ODI rankings. New Zealand batters struggled at first, but quickly adapted to the conditions and delivered a masterclass.