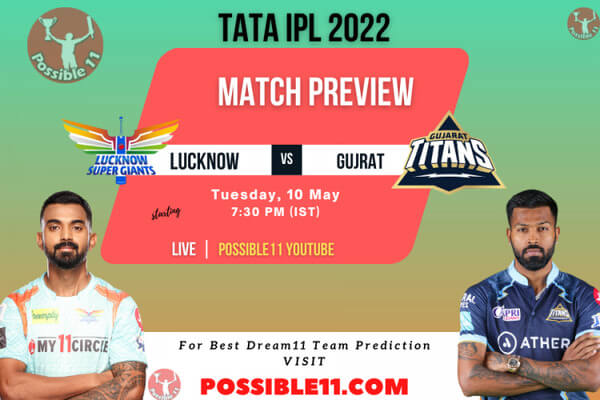 LKN vs GT - The 57th match of IPL 2022 will be played on Tuesday (May 10) between the two top teams on the points table, Gujarat Titans and Lucknow Super Giants (LKN vs GT). Both the teams are currently sitting in the second and first place in the points table with 16-16 points respectively. The only difference between these two teams in the net run rate. In this match to be held in Maharashtra Cricket Association on May 10, the team which wins will occupy the first position. Lucknow is currently in the first place due to a better run rate.

In the first encounter of the season, Lucknow LKN was tasted of defeat by the Titans GT Army. But, on Tuesday, captain KL Rahul will have a good chance to avenge this defeat. In the last match, where LKN is coming defeating KOL, Gujarat Titans had to face defeat at the hands of Mumbai. So this match is going to be very interesting. But, before this match between GT vs LSG, lets take a look at the information related to it.

Talking about the Lucknow Super Giants (LKN vs GT) before the match on May 10, then the captain of the team, KL Rahul, has performed tremendously with the bat this season. At the same time, his form is still intact. He has not let the team feel the lack of fellow opening batsman Quinton de Kock, who flopped in some matches. Lucknows LKN playing XI seems to be in balance at the moment and along with the middle order, their pace trio Mohsin Khan, Avesh Khan, and Dushmanta Chamira are also wreaking havoc in the form of stunners. With the victory in the previous matches, the morale of the team will also have increased.

The Hardik Pandya-led side was defeated by Punjab Kings and Mumbai Indians last week. Lucknow, on the other hand, won their last four matches. Huh. These include a 75-run victory against Kolkata Knight Riders in the last match, due to which the team of Lucknow will take the field with increased morale. KL Rahul has led Lucknow from the front. He has scored 451 runs in 11 matches so far, which includes two centuries and half-centuries.

The team led by Hardik Pandya, who performed brilliantly in the opening matches of Gujarat Titans (GT vs LSG), has not been able to maintain that momentum in the last two matches. Gujarats batting and bowling both have performed disappointingly. However, the team is still on the second position in the points table and by winning the match against Lucknow Super Giants (GT vs LSG), the team will try its best to reach the top once again. The special thing is that the team led by Hardik Pandya is well aware of how to make a comeback. On Tuesday, there is bound to be a neck-and-neck competition between the two.

Gujarat has to regain the old rhythm

As far as last night is concerned, he strengthened his position by coming back in difficult circumstances. Its different players have played the match so far.Played the role of the winner, but it did not happen against Mumbai when they could not score nine runs in the last over. Continuity to the batsmen of the nightneeds to be maintained. His top-order batsmen are not able to play long innings. Shubman Gill has not been able to shine, but Wriddhiman Saha has expressed his intentions well. In the recent matches, Hardik, David Miller, and Rahul Tewatia were also not able to walk. He will have to regain the old rhythm at the crucial juncture of the tournament. past night Has world-class bowlers in the form of Mohammed Shami, Lockie Ferguson, and Rashid Khan. However, Shami has not been seen in his color recently. They also need to get back into the rhythm.

This match between Gujarat Titans and Lucknow Super Giants (GT vs LSG) will be played at Maharashtra Cricket Association Stadium in Pune. There will be enough bounce and carry for the pacers in this ground. While the pitch will be good for batting. For the fast bowlers on the surface, the extra bounce and carry can get them quick wickets. But the boundary of Punes stadium is bigger than other stadiums, due to which the batsmen will have to use more force to hit big shots.

In the beginning, if the openers bat carefully with the new ball, then the bowlers can be beaten a lot in the end over. Because due to humidity, dew is also expected in the out field of MCA. Therefore the teams batting first have to set a score of at least 180+ in order to save the score.