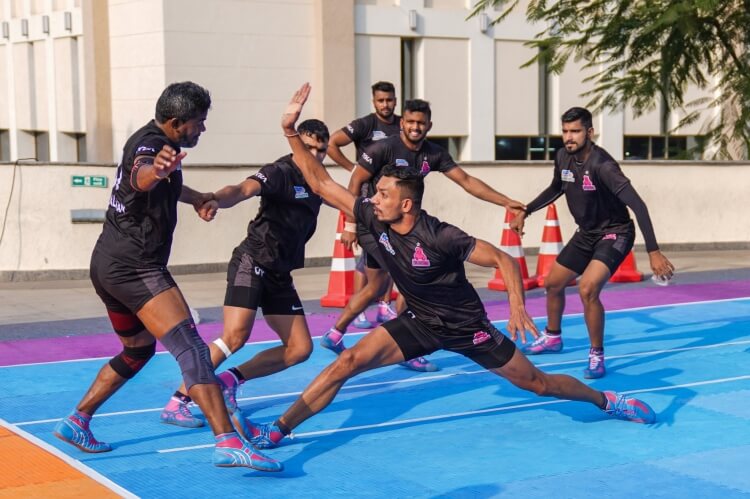 Jaipur Pink Panthers are now 6th on the points table after winning 3 of their last 4 matches, with the latest triumph coming against Gujarat Giants. Another win here would take them above their opponents and they did come out on top in the reverse fixture. UP Yoddha is 5th on the points table thanks to back-to-back wins after a 4-game losing run and they’ll be looking to put some distance between themselves and the rest of the playoff hopefuls.

The Pink Panthers are placed sixth in the PKL standings with 51 points from 17 games. They have registered eight wins and seven losses so far this season, while a couple of games have ended in draws.

UP Yoddha, on the other hand, find themselves in fifth place with 52 points from an extra game than their opponent. They have seven wins and eight losses thus far in the ongoing edition of the Pro Kabaddi League.

The Jaipur Pink Panthers won their previous encounter against the Gujarat Giants by five points. They have three wins from their last five games and will look to add more victories to their tally.

Meanwhile, the UP-based club defeated Tamil Thalaivas by a couple of points in their previous outing. They are on a two-match winning streak and will look to extend their winning lead going forward into the competition.

Deepak Niwas Hooda: Deepak Niwas Hooda is the star player for the Jaipur Pink Panthers. The all-rounder adds tremendous value to both departments. He didnt have the best of starts to the seasons but has turned it around and even won his side a couple of games. He has been back with a bang after sitting out for a couple of games, has amassed 106 raid points thus far, and will be eager to power his side again tonight.

Sandeep Kumar Dhull: After playing the second fiddle for the initial parts of the tournament, Sandeep Kumar Dhull has taken a lead role in the sides defense. The left corner defender has been among the top-performing players for the side and has claimed 40 tackle points in just 14 games, including 10 in the last couple of games. He will have a big role yet again.

Arjun Deshwal: Arjun Deshwal is the lead raider for the Panthers and the youngster has looked sharp on most occasions. The raider has added 188 raid points this season, which sees him climb up to 3rd on the list of top-scoring raiders.

Surender Gill: Surender Gill put in some fine performances last season which entrusted UP Yoddha to retain him. The youngster Gill has been superb this season and has taken the mantle in light of Narwals struggles. The 23-year-old has taken his tally this season past the hundred mark, claiming 156 raid points, and has also produced 8 successful tackles. He had a good outing in the last game with 13 raid points and would be hoping to put on another great show.

Nitesh Kumar: Nitesh Kumar is as solid a defender as one can have in the side and has started to put on strong performances. The right corner defender has now scored 45 tackle points, including 11 in the last 4 games, and is among the top-performing defenders thus far.

Sumit: Sumit is another solid defender in the UP Yoddhas side and has put on a good show. The left-corner defender has been a stellar performer and has 47 tackle points to his name. He was phenomenal in the last game and would be looking to trouble the Jaipur raiding unit.