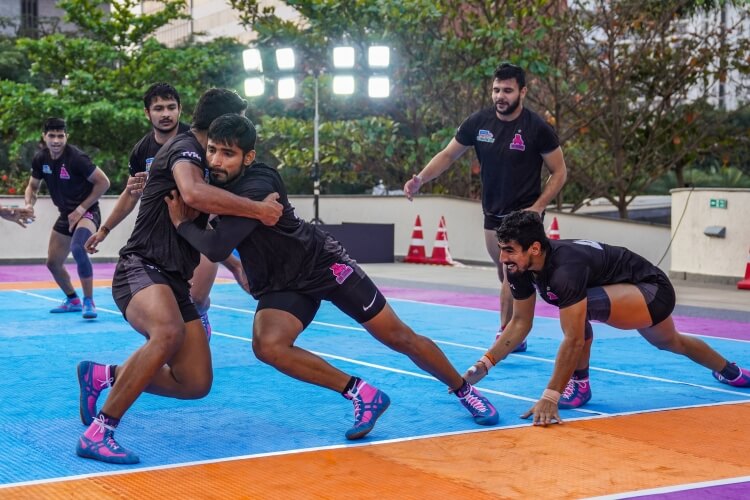 The Pink Panthers are currently fifth in the points table with 45 points from 15 games. They have registered seven wins and six losses so far in the ongoing edition of the Pro Kabaddi League. Their two other games ended in draws.

The Steelers, on the other hand, are fourth in the PKL standings with 48 points from 16 games. They have seven wins and six losses thus far this season in the competition. Three of their group-stage games ended in draws.

The Jaipur Pink Panthers won their previous encounter against Dabang Delhi KC by six points. They are on a two-match winning streak and will look to add more wins to their tally. Meanwhile, the Haryana Steelers won their previous PKL match too, doing so by 17 points against the Bengal Warriors.

Deepak Niwas Hooda: Deepak Niwas Hooda is the star player for the Jaipur Pink Panthers. The all-rounder adds tremendous value to both departments. He didnt have the best of starts to the seasons but has turned it around and even won his side a couple of games. He has been back with a bang after sitting out for a couple of games, has amassed 89 raid points thus far, and will be eager to power his side again tonight.

Sandeep Kumar Dhull: After playing the second fiddle for the initial parts of the tournament, Sandeep Kumar Dhull has taken a lead role in the sides defense. The left corner defender has been among the top-performing players for the side and has claimed 30 tackle points in just 12 games. He will have a big role yet again.

Arjun Deshwal: Arjun Deshwal is the lead raider for the Panthers and the youngster has looked sharp on most occasions. The raider has added 175 raid points this season, which sees him climb up to 3rd on the list of top-scoring raiders.

Jaideep Kuldeep: Jaideep Kuldeep has looked a class apart with his defense and the left-corner defender has registered 53 tackle points in just 16 games, which puts him at 2nd on the list of top-scoring defenders. He has formed a formidable unit with Nada and the duo will trouble most raiding units.

Vikash Kandola: Vikash Kandola is a fine raider and he has done really well thus far. He has had an odd off game in between but has done well lately to take his tally past the magical three-figure number to 133 raid points, including 10 in the last game. He will look to bring his best on the mat tonight and will hold the key in this game.

Surender Nada: Surender Nada missed the last season due to an injury he picked up before the start of the tournament and showcased what the Steelers were missing in that time. Nada is one of the most experienced defenders in the league and has accrued 37 tackle points and 2 bonus points.