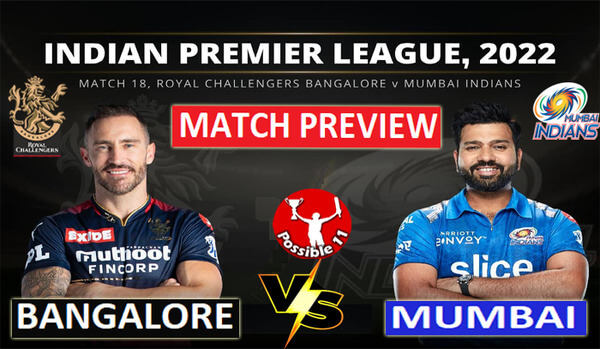 Mumbai Indians will face Royal Challengers Bangalore in the 18th match of IPL 2022. Mumbai has lost all three matches so far. While Bangalore started with a loss, the team went on to win both the matches after that.

Mumbai Indians (MI) will have to perform as a unit instead of relying on individual performances to open their account in the Indian Premier League (IPL) match against Royal Challengers Bangalore (RCB) here on Saturday. Mumbai Indians had a poor start to the season. The team has faced defeat in all the three matches played so far, due to which it is yet to open an account in the tournament.

Despite losing all three matches, some players have done well individually. Ishan Kishan has scored 81, 54, and 14 runs in the top order while young Tilak Verma (22, 61, 38) has impressed in the middle order. Mumbai Indians batting line-up has been strengthened by the inclusion of Dewald Brevis and the return of fit Suryakumar Yadav to the team. Suryakumar scored 52 runs in 36 balls against Kolkata Knight Riders.

Mumbais batting is fine to some extent but the teams bowling needs to improve.

Mumbais batting is fine to some extent but the teams bowling needs to improve. The teams foreign bowlers Daniel Sams and Tymal Mills of Australia are a matter of concern. Particularly against Sams, Pat Cummins smashed four sixes and two fours to add 35 runs in the 16th over as he equaled the IPLs record for the fastest half-century for KKR.

Royal Challengers Bangalore, the team has won two out of three matches and looks to be in good shape after starting the season with a loss. South Africas Faf du Plessis-led RCB suffered a five-wicket loss to Punjab Kings in the first match after registering consecutive wins over KKR (3 wickets) and Rajasthan Royals (4 wickets).

Du Plessis has been seen in good form, in which Dinesh Karthik and Shahbaz Ahmed are also batting well. But the team will expect Virat Kohli to score some runs as well. RCBs batting unit will be strengthened with the addition of Glenn Maxwell, who is available for the match against Mumbai Indians. Sri Lankan spinner Wanindu Hasaranga de Silva has impressed in the bowling while David Willey and Harshal Patel will have to do well to stop the Mumbai team.