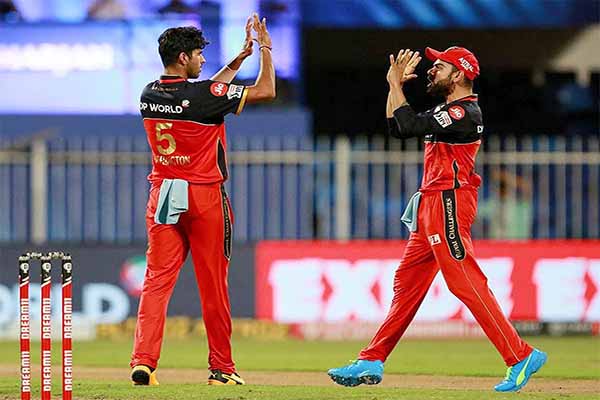 IPL 2021: RCB all-rounder Washington Sundar has been ruled out of the tournament due to injury.

"Royal Challengers Bangalore’s all-rounder Washington Sundar has been ruled out of the remainder of the Vivo IPL 2021 due to an impending finger injury. Akash Deep a state cricketer from Bengal and net bowler with the franchise has been named as the replacement.

Before the start of the second season of IPL 2021, the Royal Challengers Bangalore (RCB) team, captained by Virat Kohli, has suffered a major setback in the form of all-rounder Washington Sundar, who has been ruled out of the tournament due to injury.

The second season of the 14th season of the Indian Premier League (IPL) is starting in the United Arab Emirates (UAE) from September 19, but before that the Royal Challengers Bangalore (RCB), captained by Virat Kohli, has suffered a major setback.
Yes, RCB all-rounder Washington Sundar has been ruled out of the tournament due to injury. However, RCB has also announced his replacement.

Washington Sundar has been ruled out of the remainder of #IPL2021 as he hasn’t fully recovered from his finger injury. Akash Deep, a state cricketer from Bengal who until now was a net bowler with RCB, has been named as Washi’s replacement. #PlayBold pic.twitter.com/azaMgkaDZp

Washington Sundar will miss IPL 2021 due to a finger injury. This also means that the Indian team for the T20 World Cup 2021 is to be announced in the next few days, in which Washington Sundar will not be included. Now lets talk that RCB has selected the player as the replacement of Washington Sundar. RCB has chosen their teams net bowler and Bengal fast bowler Akash Deep in place of Sundar.

The setback for RCB in the form of all-rounder Washington Sundar is that he is known for taking out opening overs and conceding very few runs. Apart from this, they give the option of batting stormy from the top order to the lower order. Of the matches played in India in IPL 2021, Sundar got a chance in 6 matches. In four innings of these half-dozen matches, he batted and scored just 31 runs and took three wickets.

On the other hand, talking about Akash Deep, this 24-year-old player has the experience of playing 9 first-class, 11 list, and 15 T20 matches. He has taken 35 wickets in the longer format, 17 in the ODI format, and 21 in the T20 format. As a net bowler, he has been a part of RCB for a long time and is expected to make his IPL debut as he is known to bowl at a fast pace.