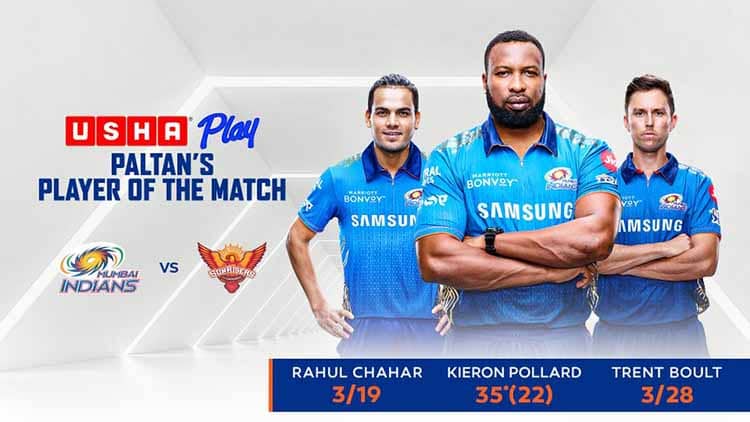 IPL 2021 Points Table: Proving why Mumbai Indians are the most successful franchise in the IPL,

Mumbai Indians scripted yet another remarkable turnaround to beat SunRisers Hyderabad and go on top of the ladder.

IPL 2021: With two wins from three matches, Mumbai Indians climbed to the top of the points table.

Mumbai Indians once again proved why they are the most successful franchise in the IPL, scripting yet another remarkable turnaround to beat SunRisers Hyderabad (SRH) by 13 runs at the MA Chidambaram Stadium on Saturday.

Despite a solid start to their run chase, SRH lost momentum in the middle phase and suffered dramatic batting collapse yet again, losing the match from a winning position. The SRH middle-order succumbed under pressure, with their batsmen playing some rash shots to gift their wickets.

To his credit, Rohit Sharma marshalled his resources brilliantly and made several key bowling changes at crucial junctures in the match and it paid dividends.

After Jonny Bairstow and David Warner got SRH off to a flier, the MI bowlers didnt lose hope and bowled their hearts out, while the fielders fielded as if their life depended on it and the result was there for everyone to see.

Hardik Pandya, after disappointing with the bat made up in the field effecting key two run outs of Warner and Abdul Samad. In the end, the target of 151 that looked modest when the chase began looked long out of the reach of the SRH players and they were bowled out for 137 runs.

This was Mumbai Indians second win of the season from three matches and they climbed to the top of the IPL 2021 Points Table, replacing Royal Challengers Bangalore. SRHs middle order choked under pressure for the second match running which left them languishing at the bottom of the points table, while the rest of the teams dropped down one place each.

Mumbai Indians leg-spinner Rahul Chahar, with three-wicket spell, bridged the gap between him and Purple cap holder Harshal Patel, taking his tally to seven wickets. His teammate Trent Boult, with another match-defining performance, marched into top three, with six wickets from three matches.