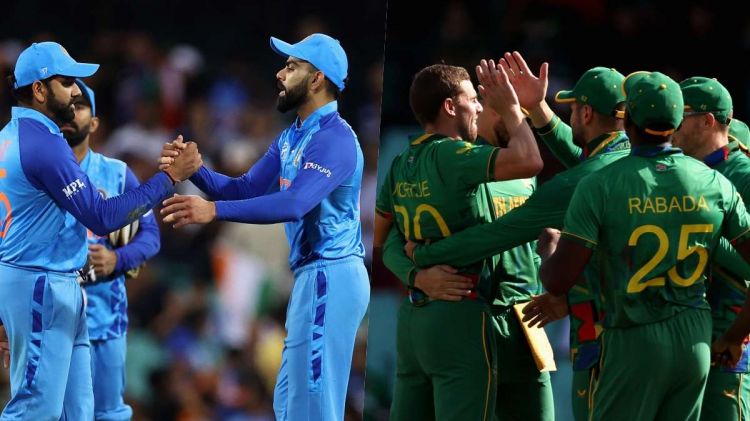 The 18th match of the T20 World Cup Super-12 between IND vs SA will be played on 30 October at Perth Stadium, Perth, Australia. This match will start at 04:30 PM(IST)

The Indian team defeated Netherlands team by 56 runs in the last match to register their second successive win in the tournament and are at the top of the points table with 4 points. Virat Kohli and Arshdeep Singh are looking in very good rhythm from the Indian team, in this match also the team is expecting a good performance from them. On the other hand, South Africa team defeated Bangladesh team by a huge margin of 104 runs in the last match and registered their first win of the tournament and are second in the points table.

Riley Rossouw, Tabrez Shamsi, Anrich Nortje performed very well in the last match for the South Africa team. Even against a strong team like India, the South Africa team expects good performance from all its players. Both teams will try to maintain their winning streak in the tournament by winning this match while performing brilliantly in this match.

Rabada specializes in swinging the ball at a speed of 145 km, while Anrich Nortje delivers the ball at a speed of 150 km. In such a situation, hand and eye coordination in the powerplay overs will be important to face these two bowlers. Due to the extra bounce from the pitch, the batsmen will have less time to play shots and it will be interesting to see how the Indian batsmen react in such situations.

Given the circumstances, Rishabh Pant would have been a good option to open the innings with Rohit but it is believed that head coach Rahul Dravid wants to retain the out-form KL Rahul in the playing XI. There is also an option to keep Pant in the playing 11 in place of Dinesh Karthik. Karthiks wicketkeeping was not as expected in the first two matches.

India vs South Africa (IND vs SA) Head to Head

IND vs SA Head to Head In T20 World Cup

IND vs SA Head to Head, On the other hand, if we talk about the T20 World Cup, then the dominance of the Indian team is visible in this too. So far 5 matches have been played between the two teams in the World Cup, out of which India has won 4 matches while South Africa has won only one match. South Africa has not won a single match against India since the 2009 World Cup.

Also Read: IND vs SA - How to watch IND vs SA match Free

IND vs SA Pitch Report, This pitch is favorable for both batsmen and bowlers, winning the toss and batting first will be the right decision on this pitch. Batting in the first innings looks a bit easier here the average first innings score is 142 runs. It has been difficult to bat in the second innings as compared to the first innings. Thats why 45 percent of the matches have been won while chasing the target.

IND vs SA Weather Report, The match in Perth will start at 7 pm. At that time it would be 4:30 in the evening in India. According to weather.com, there is no chance of rain in Perth from 7 pm on Sunday. There is a possibility of two percent rain after 9 pm. The temperature in Perth during the match will be around 13 degree Celsius. Both the teams will play matches in the cold winter.

According to the report of Accuweather, there is a 55 percent chance of rain in Perth today i.e. on Sunday, which was very less till yesterday. This means that the game can be stopped due to intermittent rain. It has also been said in this report that along with some showers during the day, strong winds and weather are expected to remain cold. But the India vs South Africa match is to be played from 7 pm local time, so the chances of bad weather affecting this match are very less.