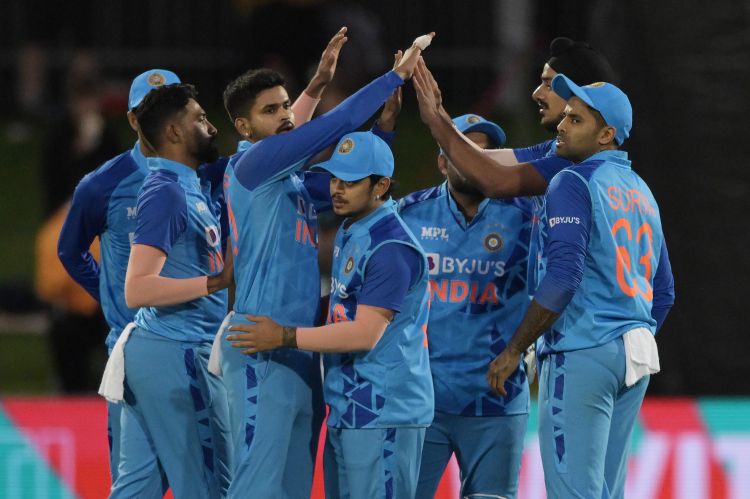 New Zealand captain Tim Southee won the toss and decided to bat first. New Zealands innings was reduced to 160 runs in 19.4 overs. In response, India had scored 75 runs for four wickets in nine overs. Then the rain interrupted. Under the DLS par score, India had scored the required 75 runs. In such a situation, the umpires decided to end the match and the match was declared a tie.

Due to non-stop rain, the umpires have decided to call off the match. The match ended in a tie under the Duckworth-Lewis method. Batting first, New Zealand had set a target of 161 runs in front of India. In response, India had scored 75 runs for four wickets in nine overs till the match was stopped due to rain.

The par score under DLS was 75 runs in nine overs, which India made. In such a situation, the umpires declared the match a tie. Superovers are not used when there is no re-match due to rain and a tie on DLS. India won the three-match T20I series 1-0.

India finish on par with the DLS score and the match ends in a tie ?

The first match was completely washed out by rain. Even the toss could not happen then. At the same time, Team India won the second match by 65 runs. The third T20 was tied. This is Team Indias second consecutive T20 series win over New Zealand at home. Earlier in 2020, India, under the captaincy of Virat Kohli, defeated the Kiwi team 5-0 in the T20 series at home.

The New Zealand team has collapsed in front of Mohammad Siraj and Arshdeep Singh. India bundled out the Kiwi teams innings for 160 runs in 19.4 overs. At one time, the Kiwi team scored 146 runs in the 17th over after losing three wickets. After this Siraj and Arshdeep wreaked havoc. New Zealand lost seven wickets in the last 14 runs ie reaching 146 to 160 runs. India now needs to score 161 runs in 20 overs to win the series. Both Arshdeep and Siraj took four wickets each.

Batting first after winning the toss, the New Zealand team had a bad start. Arshdeep Singh gave the first blow to New Zealand in the second over of the innings. He lbw out Finn Allen. Allen was able to score three runs. After this, Siraj got Mark Chapman caught by Arshdeep. Chapman could score 12 runs. Devon Conway and Glenn Phillips then took over for New Zealand. Both played a partnership of 86 runs in 63 balls for the third wicket. The Kiwi team scored 130 runs in the 16th over losing two wickets. Both Conway and Phillips scored their eighth half-centuries of T20 international careers.

Arshdeep took two wickets in the 19th over. He got Daryl Mitchell caught by Pant on the first ball of this over. Mitchell could score 10 runs. After this Ish Sodhi was bowled on the second ball. Sodhi could not open the account. Adam Milne was run out on the third ball of the over. Sirajs direct hit sent Milne to the pavilion. On the fourth ball of the 20th over, Harshal Patel bowled captain Tim Southee to wrap up New Zealands innings for 160 runs. Siraj and Arshdeep took four wickets each from India. At the same time, Harshal got a wicket. Siraj took four wickets for 17 runs in four overs. This is his best bowling in T20.