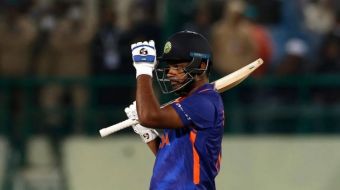 The Indian cricket teams wicketkeeper-batsman Sanju Samson got a lot of discussion after not getting a place in the T20 World Cup squad to be held in Australia. Now the selectors have given him the command of India A for the ODI series against New Zealand A. Prithvi Shaw, Kuldeep Yadav and Rahul Chahar have also been included in the team coming to India tour.

The India A team has been announced against New Zealand A team playing the ODI series on Indias tour. On Friday, the selectors have given the command of the team to Sanju Samson. For this series, many players looking for a way back in Team India have been given a chance. Three ODI matches are to be played from 22 to 27 September. All these three matches will be played at MA Chidambaram Stadium in Chennai.

Spinner Kuldeep Yadav, opener Prithvi Shaw, Ruturaj Gaikwad, Navdeep Saini, and Umran Malik, who are looking for a way back in the Indian team, have been given a place in this team. Rahul Tripathi, Tilak Verma, Kuldeep Sen, and Rajat Patidar, who performed well in IPL, have also been given a chance for this series.

India A squad for New Zealand A series