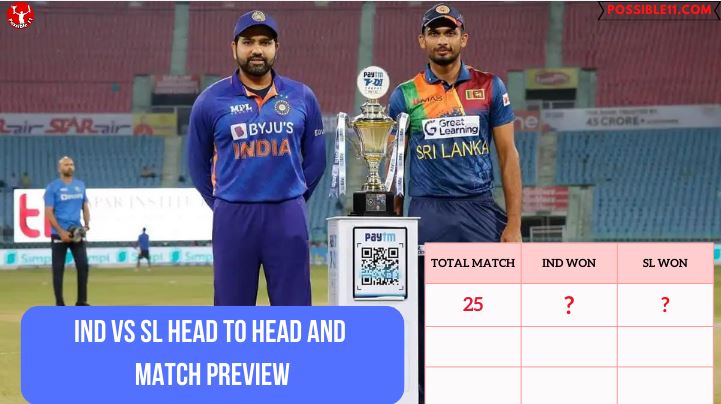 IND vs SL head to head

Indian fans are eagerly waiting for this encounter against Sri Lanka. Fans will be hoping that the Indian team will win this match and find their first victory in the Super-4, while the Sri Lankan team would also like to continue their winning streak. On the other hand, if we talk about the head to head records of both the teams before this interesting encounter, then both these teams have faced each other 25 times in T20 so far. In which the result of the match has gone in Indias favor 17 times, while the Sri Lankan team has won 7 times. one match no result

After losing in the Super-4 of the Asia Cup against Pakistan, the Indian cricket team will take on Sri Lanka on Tuesday (September 6). This will be the second match of both the teams in Super-4. On one hand, Sri Lankas spirits are boosted by the victory against Afghanistan, on the other hand, there will be pressure on Team India to return after defeating to Pakistan. If the Indian team loses in this match then it will be difficult to reach the final.

Indias second match in the Super Four of the Asia Cup is against Sri Lanka. After losing the first match against Pakistan, every match for Team India has become like a knockout match. Another defeat from here could ruin Indias hopes of playing the final. Before the T20 World Cup, the Indian team is constantly experimenting and it has been seen in this tournament as well. In the match against Sri Lanka too, Team India can go with some changes. However, due to the injury of Ravindra Jadeja, there is not much option left for captain Rohit to try.

Team India has decided on its five players in batting. Rohit and Rahul are set to open the innings and Virat will be handling the team at number three. Suryakumar Yadav at number four followed by Hardik Pandya is set to play. In such a situation, Rohit and Dravid will have to decide soon regarding Rishabh Pant and Dinesh Karthik. Pant can be given a chance in this match, as there is no left-handed batsman in the top order in the team.

Sri Lankan team can include Praveen Jayawickrama in the team in this match. Dilshan Madushanka was playing as the third bowler till now, but in this match, he can be started bowling. Both India openers Rohit-Rahul struggle against left-arm fast bowlers. Apart from this, Praveen Jayawickrama can also be given a chance, as Indian batsmen struggle against left-arm spin bowlers as well.

Most successful teams of Asia Cup

Talking about the most successful team of Asia Cup, the Indian team has won the Asia Cup a total of 7 times. After India, Sri Lankas team won this title the most number of times. At the same time, Pakistans team has managed to win this title twice. Other teams have not won a single Asia Cup yet.

Also Read: India have a chance to qualify for the Asia Cup 2022 final?