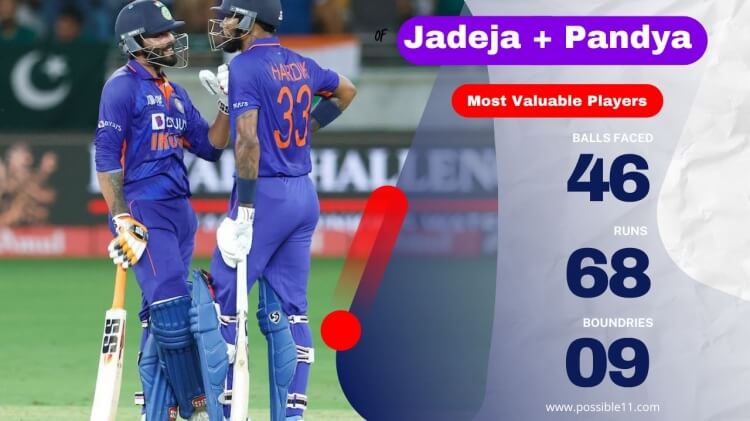 India vs Pakistan in the 2022 Asia Cup Highlights: India defeated Pakistan in a dramatic Asia Cup Group A encounter at the Dubai International Stadium thanks in large part to the steely nerves of Hardik Pandya. Hardik scored three boundaries and a six in the final two overs of the 148-run chase to help India win with two balls remaining. Pandya continued to go unbeaten at 33 while Virat Kohli and Ravindra Jadeja each played innings of 35 to give India a respectable starting point.

This has been such a great contest. A true thriller that lives up to the buzz around it. A couple straight out of a thriller from Hollywood. Bringing you all the live action has been fantastic.

SEALED WITH A SIX! Hardik Pandya finishes off the chase in style as he belts a six off Mohammad Nawaz to wipe off the deficit as India win by five wickets to start their Asia Cup title defense in style. India 148/5 in 19.4 Overs.

#TeamIndia put up a spectacular all-round performance in today’s #AsiaCup2022 match. The team has displayed superb skill and grit. Congratulations to them on the victory.

Rohit Sharma the skipper of India says that halfway through the stage they had belief and when theres that kind of belief, these things happen and the quality of the players is high. Says that it was a challenging game but a perfect one too and it is better than being one-sided. Says that its about giving players confidence and even though they were challenged at times, they pulled through. About Pandya, he says that Pandya is in form and when he was not a part of the team, Pandya worked a lot on himself and he has been brilliant with the bat, which is a good sign for the team. Adds that whether its with the bat or ball, the execution from Pandya is on point.

The way we started (with the ball) was great. We were about 10-15 runs short. Bowlers did really well to make a match of this. Our tail did step up a bit to add those handy runs. The thought was to take the game deep (and hold back Nawazs last over). Idea was to create pressure but Hardik finished well. He (Naseem) is a very young bowler but bowled so well, and showed so much aggression. Babar Azam, Pakistan captain

Watch Full Video Highlights of India vs Pakistan in the 2022 Asia Cup: