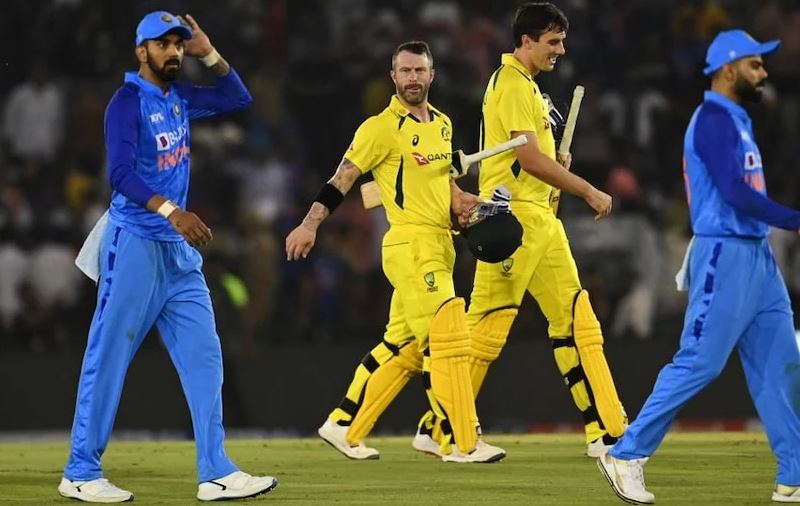 Australia team defeated the Indian team by 4 wickets in the first T20I to take a 1-0 lead in the three-match T20I series. The Indian team, who came to bat first, set a target of 209 runs in front of the Australia team due to the useful innings of KL Rahul, Suryakumar Yadav, and Hardik Pandya, Australia team came to chase the target, Cameron Green, Matthew Wades tremendous batting to reach the target. succeeded in

India batted well and scored 200+ with contributions from KL Rahul and a dynamic knock from Hardik Pandya. Indias bowling has been a concern for them with the last few of their games including the Asia Cup. Jasprit Bumrah will be back in the side for the next 2 games and that will definitely boost the confidence of India. Rohit Sharma and Lokesh Rahul will probably open the inning. Virat Kohli will bat at the one-down position. Suryakumar Yadav and Hardik Pandya will handle the middle-order batting. Hardik Pandya was outstanding with his bat, he scored 71 runs off just 30 balls with back-to-back 3 sixes in the last over. Rohit Sharma will lead India as a Captain. He is also a good Batsman Dinesh Karthik will do the Wicket Keeping for India. Axar Patel and Yuzvendra Chahal will take care of the spin bowling of his team. Axar Patel was the hero with the bowl in the last game as he picked 3 wickets. Harshal Patel and Jasprit Bumrah will lead the pace attack of his team.

Australia took a 1-0 lead in the three-match series after a stunning chase of 208 that was set up by Cameron Green and finished by Matthew Wade. With 55 needed in 24 balls, Australia had a rousing finish as Bhuvneshwar Kumar went for 15 runs first followed by Harshal Patels 22-run over. Aaron Finch and Cameron Green will probably open the inning. Cameron Green stuck his first international fifty in T20 and set up a beautiful chase in last game with his knock of 61 runs off just 30 balls. Steven Smith will bat at the one-down position. Glenn Maxwell and Josh Inglis will handle the middle-order batting. Aaron Finch will lead Australia as a Captain. He is also a good Batsman Josh Inglis will do the Wicket Keeping for Australia. Glenn Maxwell and Adam Zampa will take care of the spin bowling of his team. Nathan Ellis and Josh Hazlewood will lead the pace attack of his team.

IND vs AUS Head to Head

In T20 cricket, India and Australia (IND vs AUS) can be called two champion teams, the competition of both teams is very exciting. Cricket legends also wait for the match between both countries. Both India and Australia have won the T20 World Cup in ICC tournaments.

Talking about India vs Australia match pitch report, Nagpurs pitch often maintains some balance between bat and ball. But generally, the pitch helps the team to bat first as it is a bit difficult to chase, which is indicated by the second innings average of 128. If the team batting first scores around 180, then the team batting later may face trouble

if we talk about the weather in the competition, then the monsoon season is going on in India. The effect of this can be seen in India vs Australias second T20 match. The sky may be cloudy during the match. Due to this there is a possibility of rain, with the temperature going to be a maximum 29 degrees Celsius and minimum 22 degree Celsius on Tuesday. Also, the wind will blow at a speed of 8 kilometers per hour. Whereas the humidity can remain 86 percent.