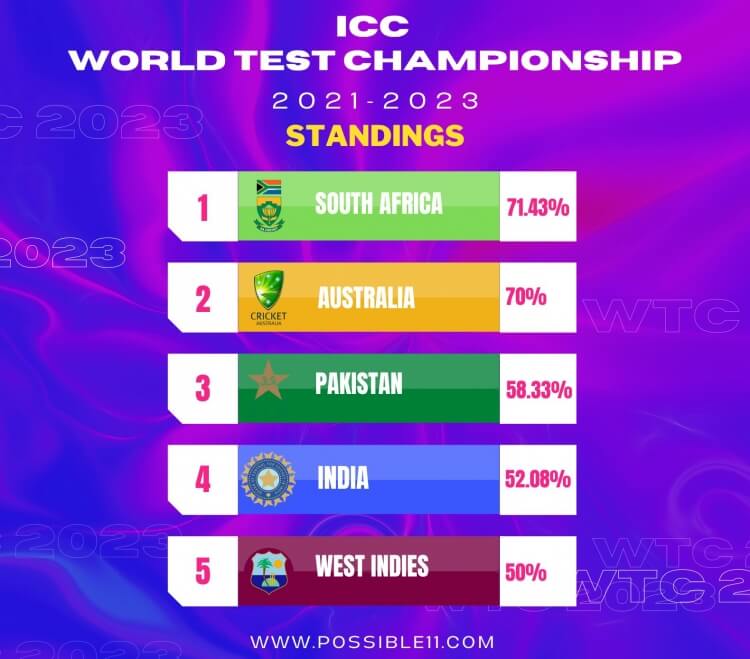 Pakistan on Wednesday reclaimed the third spot in the World Test Championship tables after beating Sri Lanka in the first Test at the Galle International Stadium. Riding on Abdullah Shafiques unbeaten knock of 160, Pakistan chased down a record total of 342 in Galle. Pakistan boosted its winning percentage to 58.33 percent, with only South Africa (71.43%) and Australia (70%) now ahead of the Babar Azam-led side. On the other hand, Sri Lanka, who had claimed the third spot after beating Australia in the second Test of the two-match series, have slipped down to the sixth spot (48.15 win percentage)

South Africa dominates the rankings and holds the top position with 71.43 percentage points. Australia is ranked second with a bare minimum gap, having 70 percentage points. Pakistan has leaped forward to the third position, and Sri Lanka, who were previously placed there has slipped to the sixth place. As a result, India has moved to the fourth position and West Indies have taken the fifth position. England, New Zealand, and Bangladesh are placed in the seventh, eighth, and ninth spots respectively.

For Team India to qualify for the World Test Championships 2021-23 Final, they will now have to win all of their remaining Tests and hope the teams above them in the standings i.e. Australia, South Africa, and Pakistan end up losing a few of their matches in the remaining bilateral series they play.

The good thing for Team India is that it will be playing two more Test series - which are part of the WTC Cycle - at home. The runner-ups of the WTC 2019-21, will play two Tests against Bangladesh and host Australia for 4-Tests.