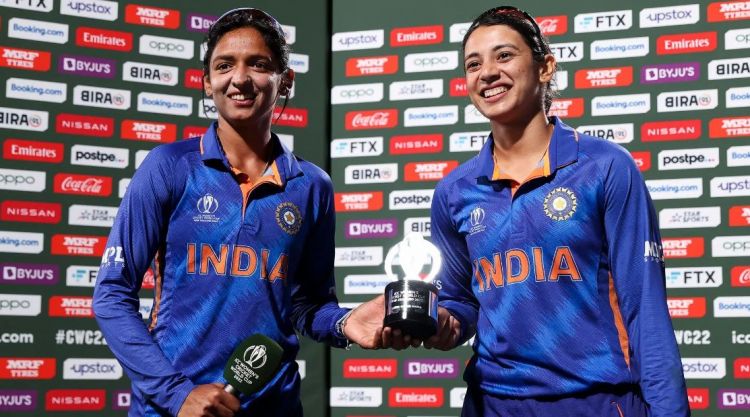 ICC Women's ODI Team of the Year for 2022, Harmanpreet Kaur got the captaincy, see the list of other players

Three Indian players have also got a place in the ICC women's ODI team. Harmanpreet has been selected as the captain of the ODI team for the year 2022.

ICC Women's ODI Team of the Year for 2022 revealed

Announcing the ODI team for 2022, the ICC wrote, "The players who have performed brilliantly in ODI cricket with ball and bat in the last year have been selected in the ICC ODI Team of the Year 2022.

Left-handed Indian women's team batsman Smriti Mandhana performed well in the year 2022. This Indian batsman scored one century and six half-centuries in the year 2022. During this, Mandhana's best innings was a brilliant 123 against the West Indies in the World Cup in New Zealand. Let us tell you that this batsman of the Indian women's team is known for his excellent batting performance in every format of cricket.

Experienced all-rounder Harmanpreet Kaur of the Indian women's team is also included in this team and the ICC has made this player the captain of the team in its ODI team. Let us inform that in the year 2022, due to the excellent captaincy of Harmanpreet Kaur, her team won many matches. At the same time, Kaur also scored two centuries and five half-centuries during the calendar year. Please tell that in the year 2022, Kaur's best innings came against England. In which he scored an unbeaten 143 runs.

Indian women's team's star bowler Renuka Singh has also been selected by the ICC in its best ODI team. Let us tell you that Renuka made her ODI debut against New Zealand in early 2022. Please tell that Renuka played a total of 7 matches for India in the year 2022 and during this he also took 18 wickets. At the same time, his best performance was taking 4 wickets for 28 runs against Sri Lanka.