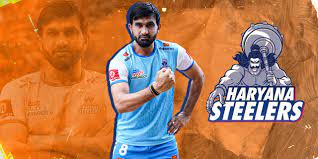 Haryana Steelers have had a rollercoaster ride in the four PKL seasons they have participated in since 2017. After making the playoffs in their first season, they were at the bottom of the standings the following (sixth) season.

The Steelers had a similar outcome, as they made the playoffs in the seventh season but struggled in the eighth.

The team has made significant changes ahead of the ninth season, including the addition of several new players and a new coach. Manpreet Singh (former Gujarat Giants coach) has been hired as the Steelers head coach. Manpreet has had an outstanding coaching career, leading the Giants to two championships.

Manpreet is known for his defensive lineups, and he has a great team to work with here: Jaideep, a young defender, was among the top defenders last season, and Joginder Narwal brings decades of experience.

The following is Haryana Steelers complete squad for the ninth season of the Pro Kabaddi League:

Here is the complete list of players retained by Haryana Steelers