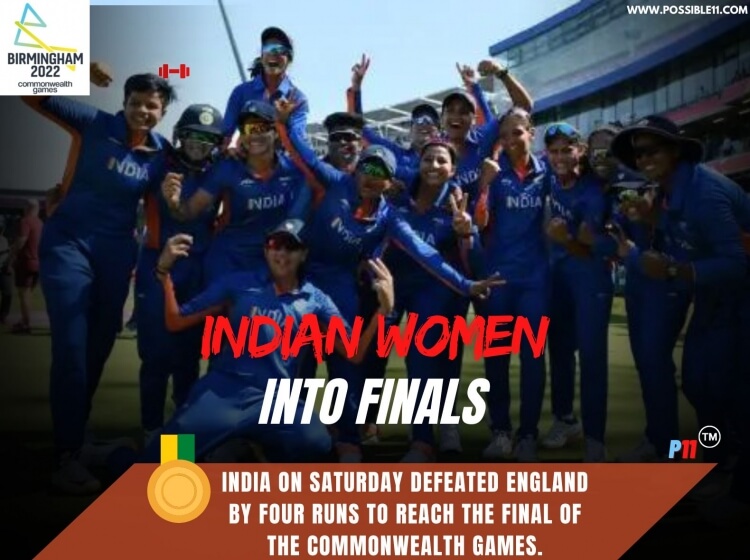 Commonwealth Games, India vs England Semi-final, Womens Cricket, Highlights: India on Saturday defeated England by four runs to reach the final of the Commonwealth Games. They will play either Australia or New Zealand in the final. Chasing a target of 165, England were restricted was restricted to a total of 160 for six in 20 overs. Earlier, Smriti Mandhana and Jemimah Rodrigues played knocks of 61 and 44 respectively as India scored 164/5 in 20 overs. Mandhana registered the fastest fifty for India Women in the shortest format. Earlier, skipper Harmanpreet Kaur failed to stay at the crease for a long haul as she departed after scoring 20. Earlier, India lost the wickets of Smriti Mandhana and Shafali Verma in quick succession. After playing a knock of 61, Smriti Mandhana walked back to the pavilion after being dismissed by England captain Nat Sciver. Earlier. Mandhana completed her half-century in the 6th over of the innings and India was completely dominating the 1st semi-final against England of the ongoing Commonwealth Games.

This win before the final will give the side huge confidence as they have come out on top under tremendous pressure after being down and out as well. England will be disappointed to not have finished this game and be in that final match. They will have an opportunity to get a medal at the bronze game tomorrow. India will be keen to keep this performance up and have an opportunity to do something special at the finals now.

Womens #Cricket team is ready for their event today at #CommonwealthGames2022 ?

In matches like this, roles have to be changed. Deeptis overs in the middle were important. Rana was amazing bowling with only three fielders in the deep. That will be remembered for a long time. I was trying to remember the last-ball matches and hoped we would get over the line. We havent done that well, so more than my fielding, I was hoping to get over the line this time. I was batting well in the last 2-3 weeks, it was like I was 2-3 years back. Im happy to have found the touch, and hope to do it in the final too. The crowd is amazing, today England had the support. We usually have it. Ill take half an hour for things to settle in. But its been amazing today. Smriti Mandhana