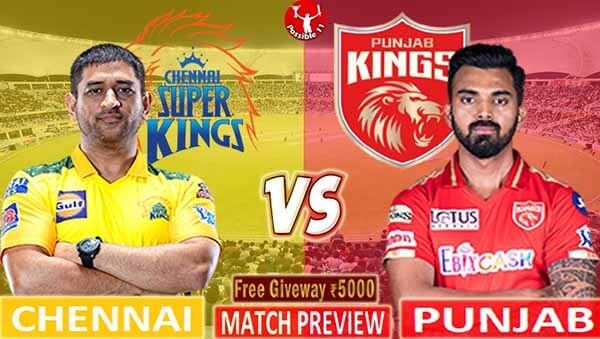 CSK vs PBKS: Dhoni army will come to the top position by defeating Punjab, this may be the playing XI of both the teams

The 53rd match will be played on Thursday in IPL 2021, in which Chennai Super Kings (CSK) and Punjab Kings (PBKS) will face each other. Both the teams will meet at Dubai International Cricket Stadium in Dubai from 3.30 pm. This is the 14th and last league match of both the teams in the current season. Under the captaincy of MS Dhoni, CSK became the first team to reach the playoffs. At present, they are second in the points table after Delhi Capitals. On the other hand, the KL Rahul-led Punjab Kings have a modest exit from the last four race but they are hoping for charisma for it against Chennai. Where Chennai has scored 18 points in 13 matches played so far with 9 wins and 4 losses and they are at the second position with the best net run rate of +0.739, from where it is impossible to remove them.

At the same time, the team of Punjab Kings has won 5 and lost 8 in 13 matches played so far. He has total 10 points and net run rate is -0.241. He is at the sixth position in the points table. Even if she manages to beat Chennai on Thursday, her net run rate will not be better than the net run rates of fourth and fifth ranked Kolkata (+0.294) and Mumbai Indians (-0.048). Only some mishap or charisma can take Punjab to the playoffs now.

Whos where in the Points table?

Mahendra Singh Dhoni-led CSK are on the second spot with 18 points. She has qualified for the playoffs. At the same time, Punjab Kings led by KL Rahul are at sixth place in the points table with 10 points. The chances of the Punjab team reaching the playoffs are slim.

On the other hand, if we talk about the figures, then Chennais turn looks heavy. There have been 25 matches between the two teams, in which Chennai has won 16 matches while Punjab has won 9 matches.

Keep an eye on these players

Rituraj Gaikwad from Chennai, Faf du Plessis is seen in rhythm. At the same time, Ambati Rayudu has also shown a good game in the middle order while Suresh Rainas performance has been very poor. Maybe Chennai can make one or two changes in their team in this match. At the same time, Deepak Chahar, Shardul Thakur, Josh Hazlewood, and Dwayne Bravo are good bowlers in bowling. Despite this, the team has to face defeat in the last two matches. On the other hand, KL Rahul and Mayank Agarwal are in good form for Punjab. At the same time, the team will have hopes from Mohammed Shami, Arshdeep Singh, and Ravi Bishnoi in the bowling.

CSK vs PBKS: if you lose money in dream 11 then join our Telegram channel where we provide a winning team of every match