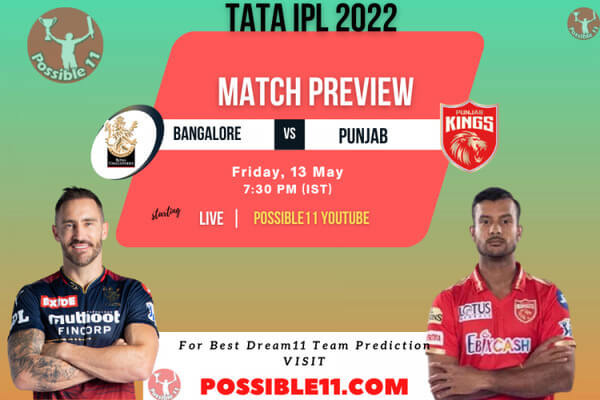 BLR vs PBKS The caravan of IPL 2022 is now fast approaching its decisive week. All the teams are putting everything at stake in their quest to make it to the playoffs. In this episode, on Friday, May 13, in the 60th match of the current seasons league, Royal Challengers Bangalore and Punjab Kings (BLR vs PBKS) are going to clash at the Brabourne Stadium in Mumbai. This is the second time this year that Bangalore BLR and Punjab PBKS will clash against each other, before that both the teams were facing each other in the second match of the league.

Where Punjab won in a very exciting style. But now the equations have changed, as per the latest points table, BLR is at 4th position with 7 wins from 12 matches and Punjab Kings PBKS are at 8th position with 5 wins from 11 matches. Obviously, the fight between the two teams to get 2 points is going to be very interesting, so through this article, let us tell you about every important piece of information related to the BLR vs PBKS match.

Under the captaincy of Faf du Plessis, Royal Challengers Bangalore BLR started IPL 2022 with a bang, it was proving impossible to stop this team from winning 5 out of the first 7 matches. But in the middle of the season, BLR had to face three matches in a row, which ruined their caravan. Right now the Challengers team remains in the top-4 with 14 points but to cement their place, it is very important for Bangalore to get at least 16 points and the team has only 2 chances for this.

If Royal Challengers Bangalore BLR have to win against Punjab Kings PBKS, then the teams legendary batsmen Virat Kohli, Faf du Plessis, and Glenn Maxwell will have to show a big performance, so far Virat and Maxwells bats have not scored according to their status. . Now this is the time when both these players will have to prove to be match-winners for the team by increasing their stature. 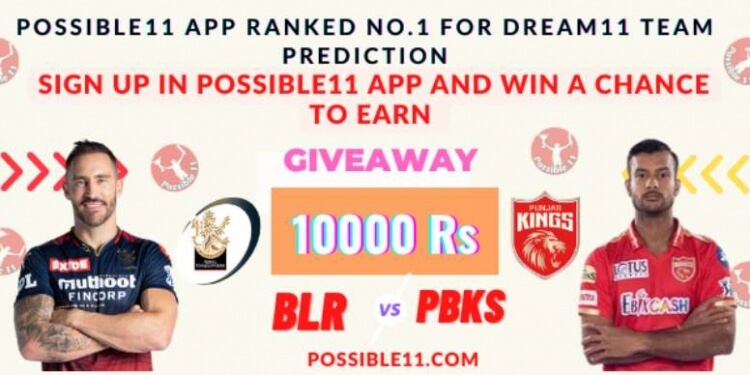 Along with this, if we talk about Mayank Agarwal-led Punjab Kings, the strongest team in the on-paper tournament has not performed as expected so far. The loss to Rajasthan Royals in the previous match even after scoring 190 runs exposes the shortcomings of the team. The positive point for Punjab in this match was that Jonny Bairstow scored a half-century as an opener.

There have been frequent changes in the batting order for Punjab Kings, due to which there has been no consistency in the performance of the players. In the last match, Liam Livingstone was sent by the team management to bat at No.6, which is a lower number according to his style. But now against Bangalore, Punjab would not want to repeat the mistake of this method, as this team, which is on 10 points, needs to win every match to make it to the playoffs. A defeat can only limit the journey of Punjab Kings to the league stage.

BLR vs PBKS Head to Head

The match between Royal Challengers Bangalore and Punjab Kings (RCB vs PBKS) has always been a close contest. Both the teams have put their full strength to win. In such a situation, take a look before this match, so far in the history of IPL, the head-to-head record between the two has been equal.

The two teams have clashed in 29 matches so far in the long history of IPL. Out of these 29 matches, 16 times the result has gone in favor of Punjab Kings. At the same time, in 13 matches, Royal Challengers Bangalore have won. This year also both the teams had met in the second match of the league, in which Punjab Kings won in a very exciting way.

Talking about the pitch before the match between Royal Challengers Bangalore and Punjab Kings (RCB vs PBKS) at the Brabourne Stadium, it is good for the bowlers. Here the fast bowlers get good bounce, so the target of 180+ runs is a big challenge for the teams here. Fast bowlers prove to be very effective on Brabournes red clay pitch,

Because they get a good bounce here, the ball also comes well on the bat because of the bounce on the pitch. This pitch is useful for both batting and bowling. The average first innings score at this ground in IPL is 170. The team batting first has 36.8% while the chasing team has a winning percentage of 63.2% on this ground. Keeping these numbers in mind, both the teams would like to bowl first after winning the toss.