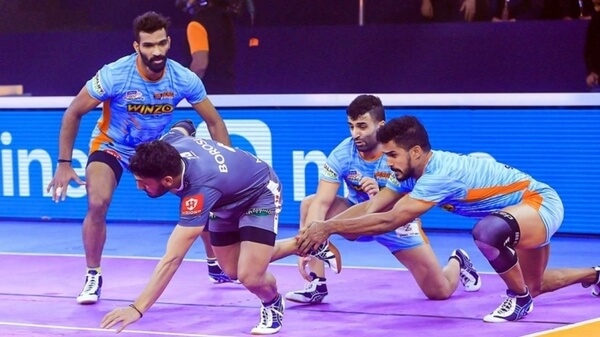 The Bengal Warriors will lock horns with the Telugu Titans in the 101st match of the Pro Kabaddi (PKL) 2022 on Monday, February 7. The Sheraton Grand Whitefield Hotel and Convention Center in Bengaluru will host the contest.

The WARRIORS ? The TITANS?

The Warriors are currently placed 11th in the PKL standings, with 41 points from 17 games. They have seven wins and nine losses thus far in the ongoing edition of the Pro Kabaddi League. Their remaining one game ended in a draw.

Meanwhile, the Titans are reeling at the bottom of the Pro Kabaddi points table with just 23 points from 16 matches. They have only one win and three draws to their name in the eighth edition of the Pro Kabaddi League. The club has lost 12 group stage matches and another loss would see them get knocked out of the competition.

The Bengal Warriors lost their previous PKL match against the Patna Pirates by 11 points. They have only one win in their last five games and will need to get back on track before time runs out.

The Telugu Titans, on the other hand, lost against UP Yoddha by four points. They havent won any of their last five games and havent been up to the mark so far this season.

Bengal Warriors Maninder Singh: Maninder Singh is the top raider in the Bengal Warriors side and has been one of the major reasons behind Bengal Warriors victories this season. The tall and strong raider has had a solid season, registering 200 raid points in 16 games, including 13 in the last game. However, most of his points are coming off bonuses lately and he wants to change that. He is now 2nd on the charts of top-scoring raiders and will be looking to go big in this game.

Mohammad Esmaeil Nabibakhsh: Mohammad Esmaeil Nabibakhsh is the x-factor in the Bengal Warriors side. He can raid, he can tackle and is just the kind of player every coach would want. The Iranian was the top scorer for the side in the opening game but hasnt been able to maintain his high standards since, though he has shown glimpses of his abilities. He has taken his tally to 57 raid points and 19 tackle points and would be eager to prove a point tonight.

Ran Singh: Ran Singh is an experienced defender and has added the much-needed steel to Bengals defense. The experienced left corner defender has secured 26 tackle points in just 8 games, including 8 in the last couple of games, and will be a player Patnas raiding department would be wary of.

Rajnish: Rajnish is a dynamic, young raider and dictate play on his day. He hasnt played too much this season but has done well in the little time he has spent on the mat. He has a brilliant game last night as he managed just 11 raid points and 2 tackle points. He will be a pivotal player in this game.

Sandeep Kandola: Sandeep Kandola has made a mark for himself this season with some fine performances. The left-corner defender has held the Titans defense and has scored 39 tackle points thus far. He earned 3 tackle points against a strong UP Yoddha raiding unit and will be hoping to continue the run.

T Adarsh: Adarsh has had a topsy-turvy season. He started slow but picked up some momentum lately, however, he has now come back to falling off the radar. His tally reads 58 raid points, while he has also added 2 tackle points. He will be looking to ride on the highs of his previous games.