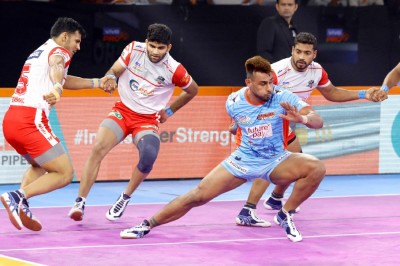 The Bengal Warriors will lock horns with the Haryana Steelers in Match 38 of the Pro Kabaddi League (PKL) 2021-22 on Friday at the Sheraton Grand Whitefield Hotel and Convention Center in Bengaluru.

Defending champions Bengal Warriors will take on a much fancied Haryana Steelers side in theopening game of Friday evening.

The two teams have had a similar run thus far and are 6th and 7th on the table respectively. Bengal have won 3 of their 6 games, while Haryana have 2 wins and a tie in their 6 games. Both sides would be eager to win the game and stay on top of the other.

Maninder Singh will lead the Bengal Warriors as a Captain. He is having top most fantasy points in this series.

Vikash Khandola will lead the Haryana Steelers as a Captain. He is also a good Raiders

Maninder Singh: Maninder Singh is the top raider in the Bengal Warriors side and was one of the major reasons behind them lifting the coveted Season 7 trophy. The tall and strong raider ended last season strongly and has started this one well, registering 72 raid points in 6 games, including 12 in the last game. He also put in a successful tackle. He has been superb in the last few games and will be key.

Mohammad Esmaeil Nabibakhsh: Mohammad Esmaeil Nabibakhsh is the x-factor in the Bengal Warriors side. He can raid, he can tackle and is just the kind of player every coach would want. The Iranian was the top scorer for the side in the opening game and has put in a fine show since. He has 26 raid points and 10 tackle points to his name. He has missed a game and has had a poor game but has been brilliant otherwise. He would be tempted to put in another solid show.

Abozar Mohajermighani: A strong defense is a key to putting pressure on the opposition and Abozar has added steel to the sides defence. The right corner defender is very neat with his tackles and registered 10 tackle points thus far. He will have a big role to play tonight.

Jaideep Kuldeep: Jaideep Kuldeep has looked a class apart with his defence and the left-corner defender has registered 18 tackle points in just 6 games, which sees him 6th on the list of topscoring defenders. He has formed a formidable unit with Nada and the duo will trouble most raiding units.

Meetu Mehender: Meetu Mehender is a talented young raider and he has done really well thus far. He had a game to forget the last time around and would be eager to comeback. He has 34 raid points thus far and will hold the key in this game.

Surender Nada: Surender Nada missed the last season due to an injury he picked up before the start of the tournament, and showcased what the Steelers were missing in that time. Nada is one of the most experienced defenders in the league and has accrued 19 tackle points and 2 bonus points, making him one of the top-scoring defenders.