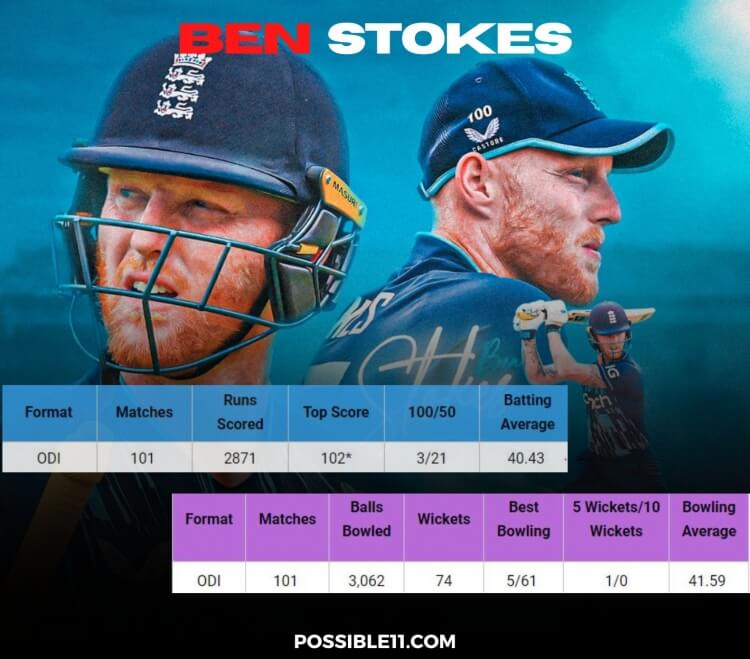 The Test captain, whose astonishing performance in the final against New Zealand earned England their 2019 title, has been an integral figure in all formats for a decade but has determined that continue to play all three formats for England.

Ben Stokes Retirement: The ICC Mens ODI World Cup 2019 champion said that the first ODI between England and South Africa in Durham will be his last match in the format. Check his ODI Batting and Bowling Stats.

From featuring in an ICC Mens U19 Cricket World Cup in 2010 to becoming an ICC Mens @cricketworldcup champion in 2019 ?

A special ODI player, and what a career!

Ben Stokes posted a long note on Instagram and Twitter saying, "will play my last game for England in ODI cricket on Tuesday in Durham. I have decided to retire from this format. This has been an incredibly tough decision to make. I have loved every minute of playing with my mates for England. We have had an incredible journey on the way."

He stated that as hard as a decision as this was to come to, it’s not as hard as dealing with the fact that he cannot give his teammates 100 percent of himself in the format and that the England jersey deserves nothing less from anyone who wears it.

Stokes said that the three formats are unsustainable for him adding, "Not only do I feel that my body is letting me down because of the schedule and what is expected of us, but I also feel that I am taking the place of another player who can give Jos and the rest of the team their all. It’s time for someone else to progress as a cricketer and make incredible memories like I have over the past 11 years."

"with this decision, I feel I can also give my total commitment to the T20 format."

He said, "I have loved all 104 games I have played so far, I’ve got one more, and it feels amazing to be playing my last game at my home ground in Durham."

Ben Stokes to retire from ODI cricket: His notable records

Ben Stokes had made his ODI debut against Ireland in 2011. His ODI career highlight was his incredible match-winning effort in the ICC Cricket World Cup 2019 final. His unbeaten 84 runs and his batting in the Super Over helped England clinch its first-ever ODI Cricket World.

Ben Stokes has scored a total of 2919 runs in ODI cricket including three centuries and taken 74 wickets.
Stokes also has 74 ODI wickets to his name (one five-wicket haul).

Stokes 84 is the fifth-highest score in a run-chase of a World Cup final.
In the league match against South Africa, Stokes scored a fifty, scalped two wickets, and grabbed two catches.
With this, he became the fifth player in World Cup history to achieve this mark.