Aakash Chopra shuts down a rude fan on Twitter This is not the first time when Aakash Chopra has responded to a fan in a sarcastic tone.

Former Indian cricketer Aakash Chopra, in the past couple of years, has emerged as one of the most recognized cricket experts. Chopra has made a smooth transition into making a career in cricket media since retiring from professional cricket. He is quite active on social media apart from his broadcasting commitments.

On Wednesday, Aakash Chopra shut down a fan with a reply which will remain the social media highlight of the day. After the toss of the IPL 2021 match between Sunrisers Hyderabad and Royal Challengers Bangalore, the cricket expert took to Twitter, where he wrote about the changes which the teams made.

After this, the fan asked a rude question to Chopra. As a celebrity, he could have ignored the comment in which the fan dragged his father, but instead, he gave a classic reply. The sarcastic note of the tweet was quite visible.

“Give a hug to your father from my side,” Aakash Chopra says to the fan

“My father doesn’t play cricket. Give a hug to your father from my side. He might be feeling a little unhappy seeing the language his son has used. Good bless you,” Chopra replied to the fan. He deleted the tweet later. Earlier, the former Indian batsman had written on Twitter, “Warner wins the toss and fields first. Pitch looks like one on the slower side…again. Holder plays for Nabi. Shahbaz for Sandeep. Chalo….tonight Shahbaz’s team will win for sure.” 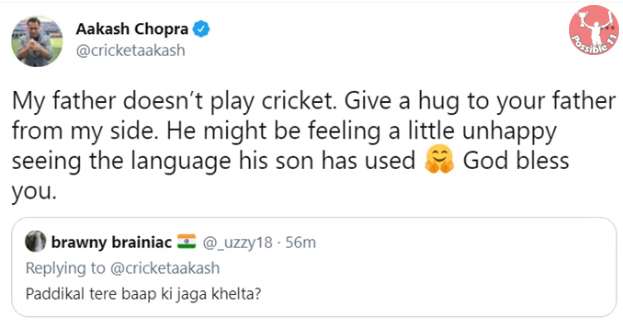 Speaking about the match between SRH and RCB, Glenn Maxwell’s fighting knock of 59 from 41 helped his team finish on a high. RCB made 149 from their 20 overs after SRH captain David Warner sent them to bat first after winning the toss. Virat Kohli made a handy contribution of 33, while Jason Holder bowled a good spell on his comeback, picking up three wickets.

RCB started with the ball well when Mohammad Siraj dismissed Wriddhiman Saha early in the innings. That was the only wicket Hyderabad lost by the 10-over mark. But RCB made a comeback in the final overs to restrict SRH by 6 runs.