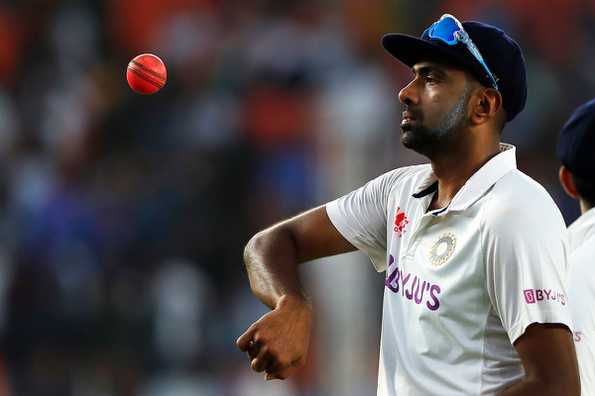 Not easy to land the SG pink ball on its seam: Ashwin

India spinner Ravichandran Ashwin has said that it wasn't easy to impart revolutions to the SG pink ball despite a much more pronounced seam, during the third Test between India and England in Ahmedabad, and it meant that more balls tended to land on the glossy leather part and skid on.

"Even before I started the game, I was a little sceptical in the nets," Ashwin said. "When I bowled, the balance of the ball was a lot different to the red ball. When you try to put too much revs, it wasn't rotating as much at the seam as I thought the red ball was. Clearly, the chance of it catching the glossy surface was far greater. If at all it caught the seam, it was spinning quite big and not responding the way the red ball might. Whatever was happening, was happening really quick off the surface.

"If we played a red-ball game on the same surface, the pace of the game must have been a touch slower. These are all the things I'm talking about in hindsight.

A total of 21 wickets out of 30 were bowled or lbw in the third Test in Ahmedabad which finished inside two days. Rohit Sharma and Joe Root have already spoken about how it was difficult to adjust to how quickly the ball came off the surface in Ahmedabad.

"I can't really explain but a small few microseconds make such a huge difference in a game," Ashwin agreed. "And if it's going to skid on even a fraction quicker, that's the difference between hitting the inside edge and hitting the pad, so it is quite different. Sometimes the batsman can be caught with the bat behind the pad because the ball skidded faster than what you've been used to with the red ball. To make an adjustment within a span of five-six days is not so easy. The more we play, the more players will get better."

Ashwin said that it hasn't been easy for batsmen all around the world to adjust to the vagaries of the pink ball, especially with such a short turnaround between games. He also pointed to low scores being a "regular affair" in pink-ball Tests, stressing on how the players need to be given time to adjust to a new facet in the game.

"If there's a little bit stacked in favour of the bowlers, this is what might happen. When there is a little bit of advantage to the bowlers, where it swings more or seams more, the margin of error for the batter is so little. It happened even at the Eden Gardens against Bangladesh. It could very well be spoken about how we played really well and won the game but that has been the nature of pink-ball Tests. Even in New Zealand, England were all out for 58. We were all out in Australia for 36. When you look at the larger picture of Test cricket, you might say these are one-off occasions but these are a regular affair in pink-ball Tests," Ashwin said.

"The pink ball has got a new dimension to the game, so it's about adapting. You play more and more and get used to it, the players are going to adapt better. The same thing with one-dayers. We were used to playing with the red ball and then shifted to the white ball. Initially, the white-ball was doing a lot. Now, it does nothing. That's how this format will also evolve. People will learn how it works. Anything new is going to have a lot of challenges," he added.

Having only ever played three pink-ball Tests with the SG ball and one with the Kookaburra ball, Ashwin said he doesn't have enough sample size to compare the balls but said that there's more bounce and pace with the pink balls everywhere when compared to the red ball.

"I realized with the pink ball in Australia, it definitely aided more bounce and pace off the surface than the red one and here also it's the same; it offered more bounce and pace off the pitch than the red ball would. And that's probably due to the lacquer on the ball and the slightly more prouder seam that both these pink balls have. I can't differentiate much at this point in time. I have very few sample sizes in my hand. And even when I am done, I don't think there are going to be that many matches that I can talk about."