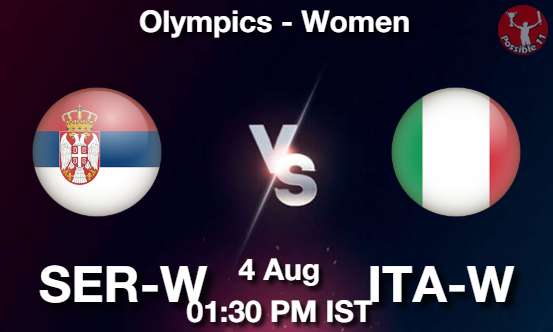 Serbia breezed through Pool A with just one loss in five matches to claim the second spot in the standings. Their only loss came against the so-far unbeaten Brazil side. They won all their four matches, against South Korea, Japan, Kenya, and the Dominican Republic, in straight sets, showcasing their strength in fine fashion.

Italy also started their proceedings in easy fashion, winning the first three games on the trot, against the ROC, Turkey, and Argentina before succumbing to the Chinese and the Americans in the last two matches of the Pool to go down in the standings. They will relish the Serbian challenge as both teams are similarly placed in terms of ranking but form sides with the Serbian women. An interesting battle is on the cards.

Tijana Boskovic is the current leader in the Olympics for points scored. The Serb has a brilliant 116 points in 5 games so far, with 103 attack points which are 8 more than the nearest player. Her best ever night came against the hosts when she scored 31 attack points to help the European side to a straight-set victory.

Milena Rasic is a key Serbian piece that generates points despite having the role of the blocker. She has registered a total of 42 points so far, which includes a brilliant 26 attack points, which is very advantageous for her position on the board. She is also a key player on the block, notching 12 points for the Serbs.

Paola Egonu is another offensive gem, but for Italy. Similar to Boskovic, she has been a force for the Italians, turning up for match after match in the group stage. Italy’s last two matches were losses, but Egonu notched a brilliant 41 points in the two encounters, doing some heavy lifting.

Monica de Gennaro is the libero choice for the game. She has 49 dig points, which is 12 more than her Serbian counterpart Silvija Popovic. The Italian also has a better success rate than her counterpart meaning if the match gets tight, de Gennaro’s number might be bigger.

Caterina Bosetti is a solid secondary option to have. Both Boskovic and Egonu are miles ahead of the rest of the team, but Bosetti is the best of the rest. The Italian has registered a total of 54 points, which includes 45 attack points from the five matches. She is a solid support piece to be included in the squad.

1.Tijana Boskovic: For those believing in Serbia to turn up the tempo, Tijana Boskovic should be the top pick. She leads all players in the Olympics in both total points scored as well as attack points scored which are 116 and 103 respectively. She is the key offensive pillar for Serbia and she is bound to come up with big numbers even in losses, evident by the 30-attack point performance by her against Brazil in 4 sets.

2. Paola Egonu: On the other side of the court, Egonu is equally as dominant. She is the second-highest scorer on the list, notching 95 attack points and 110 total points. Both her and Boskovic are almost sure to be the dominating attackers that differentials hold less value in this tie. The individual battle between the duo could determine which team comes out on the top in the end. Safe to say, both are bound to produce high numbers and if you are not a Serbia fan, Egonu should be your captain. 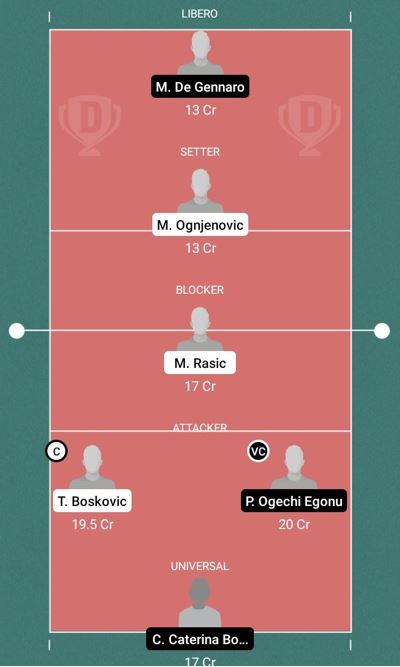