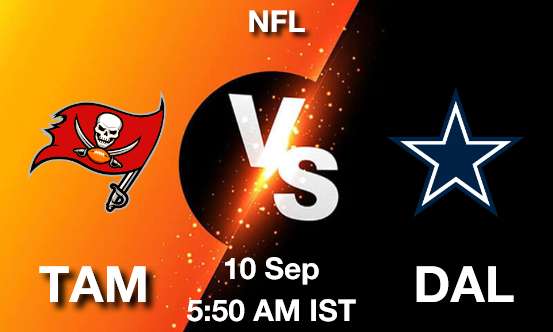 The NFL will finally kick off its regular season in 2021 at the Raymond James Stadium in the Sunshine State with a blockbuster clash between the reigning NFL Champions, Tampa Bay Buccaneers and one of the most popular franchises of the league, the Dallas Cowboys.

This clash will also feature the return of Cowboys’ star quarterback, Dak Prescott while Buccaneers will be rooting heavily for the likes of their superstar, Tom Brady.

The end of the preceding season witnessed Dallas finishing with a 6-10 record and ending third in the NFC East. Buccaneers, on the contrary, bagged a record of 11-5, securing a wild-card position, ending second in the NFC South.

They would eventually go onto win the NFL as they drubbed Kansas City 31-9 in the Super Bowl LV in February.

Tom Brady will undoubtedly be one of the top picks considering the fact that his preceding season witnessed him completing 65.7 percent of his passes for 4633 yards, finishing 40 touchdowns and completing 12 interceptions.

Dak Prescott couldn’t play the entire season in 2020 due to his ankle injury but the five games in which he starred saw him completing 68 percent of his passes for 1856 yards, finishing 9 touchdowns and four interceptions.