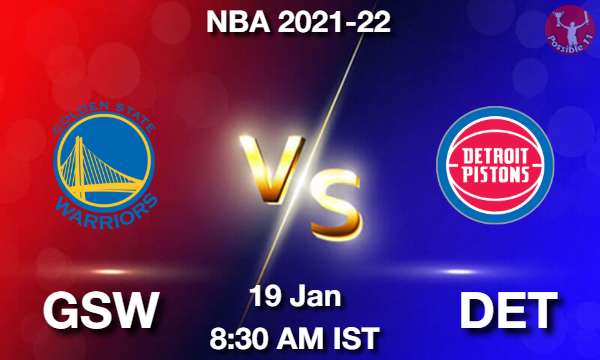 Warriors have lost five out of the last seven games and that is largely due to midseason fatigue and an injury to Draymond Green.

While the MVP award is usually showered to superstar faces who dazzle with their scoring, Green is no less valuable than Curry.

He sets hard screens, plays all-position defense, grabs tough boards, pushes the ball up, is the leading playmaker of the team, and overall, provides superb leadership on both ends.

With Draymond, the Warriors are more focused on the defensive end and now with him gone, they are having trouble in multiple spheres.

I think the team just needs a bit more time and in a game or two, they will figure out the combinations. Detroit has been having a difficult season and most of the time, they lose by 10+ points, well out of the game by the first half during many occasions.

Pistons are slated to win 20 or fewer games with the current rate and imagine it is when the team has played their best basketball recently.

Detroit is highly young, with a rookie Cade Cunningham at the one guard, sophomores Killian Hayes at off-guard, Saddiq Bey at the wing, Isaiah Stewart at the Center position, and Hamidou Diallo as a fifth-year player, the core of Detroit is young and still learning the craft of the NBA.

There are concerns with Hayes developing slowly as a scorer, Stewart having his troubles, and with both Cade and Hamidou being erratic, but hey, these are young players.

Still, I believe Detroit’s foundation looks a little shakier compared to teams like Magic and Thunder. Will these players prove this belief wrong down the line?