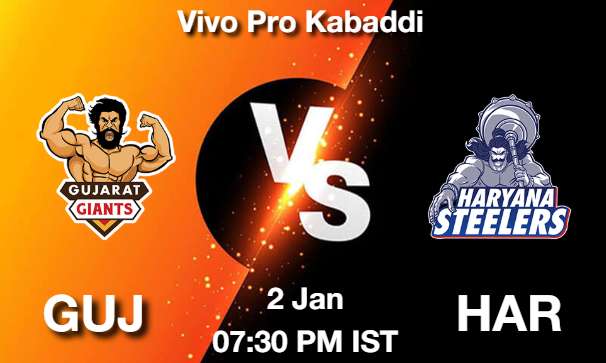 It’s a battle between the 7th-placed Gujarat Giants and the 11th-placed Haryana Steelers on Super Sunday of PKL season 8. Both teams are coming into 2022 after not finding the best of form in the initial matches of the league in December, having won just 1 of 4 games each. When it comes to head-to-head, it is the Haryana Steelers who have dominated in this fixture with a 69% winning record.

Rakesh Narwal has been the lead raider for the Giants, averaging 10 points a match with 40 raid points on the stat sheet.

The all-rounder Rakesh Sangroya has complimented the aforementioned Rakesh on the attack front, scoring 17 raid points in his debut season.

Girish Ernak was back in form last time around after a few rough outings as he put up 4 tackle points, which took his tally for the tournament to 12.

Jaideep Kuldeep is second on the top defender list with 15 tackle points at an average of 3.75 tackle points per match. The youngster who impressed during the K7 StageUp is proving to be one of the rising stars in the PKL.

Surender Nada isn’t all that far behind his young partner on defense, as he too is one of the top defenders, with 14 tackle points from 4 matches.

Rohit Gulia has an impressive raid strike rate of 77% this season and he has registered a total of 30 raid points.

Rakesh Narwal: He has a 62% raid strike rate and also, a 33% tackle success rate so far inthe season. He also comes into this game on the back of a Super 10.

Rohit Gulia: Gulia is a solid vice-captaincy pick here and he has been fairly consistent all season. He also has a Super 10 to his name. 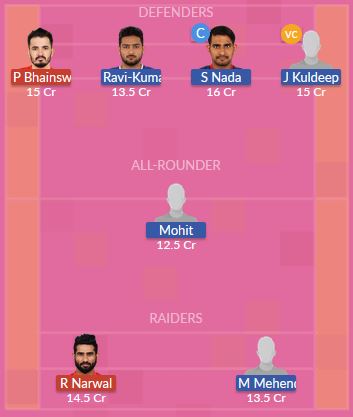 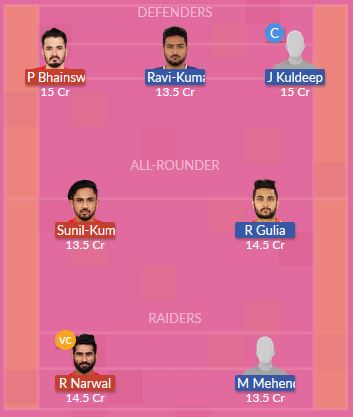