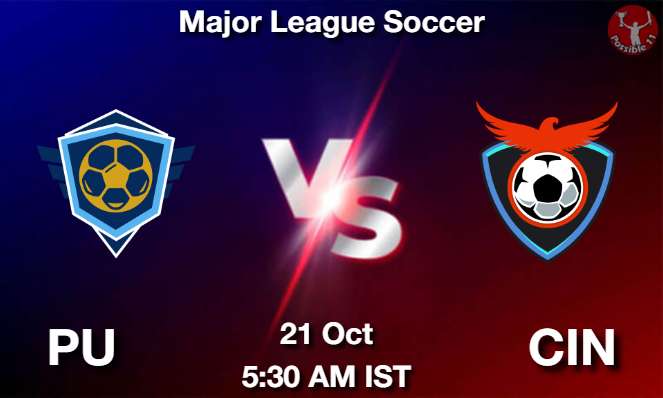 PU vs CIN Weather Report: The weather will be clean and there are no chances of rain.

PU vs CIN: Philadelphia Union will take on FC Cincinnati in Major League Soccer on Friday, 21 October 2022 at 05:30 AM IST

The home team narrowly missed out on the Supporters Shield against Los Angeles FC and will be looking to go all the way in the MLS Cup. They finished first in the Eastern Conference and earned a direct place in the semi-finals of the playoffs. They signed off for the MLS regular season with an impressive 4-0 win over Toronto and will be looking to maintain that form here.

Cincinnati finished fifth in the Eastern Conference standings and had to earn their place in the semi-finals via the first round. They overcame the New York Red Bulls in an away game, with second-half goals from Luciano Acosta and Brandon Vazquez helping them overturn a one-goal deficit.

Philadelphia Union looks in good form in recent matches, They are the favourites to win the match

Philadelphia are strong favorites in this game, but Cincinnati should not be underestimated as the in-form trio of Brenner, Brandon Vasquez, and Luciano Acosta can turn the outcome of any game on its head.

PU vs CIN Major League Soccer Match Expert Advice: Daniel Gazdag will be a top multiplier choice for the small leagues. Kai Wagner will be a decent choice for the captaincy in the grand leagues.

PU vs CIN Head to Head

PU vs CIN match will be live telecast on Fancode

PU vs CIN dream11 prediction video will be posted soon

Where can I see PU vs CIN Live Score?

You can see PU vs CIN Live Score on Fancode, etc.

You can watch PU vs CIN match highlights on Fancode and also watch after match here.

Q-5, What are PU vs CIN dream11 Captain and Vice-Captain Choices?

Q-6, Is there any injury in PU vs CIN today match?

A-6, There are no injury updates as of now in PU vs CIN today match. Will update in the app if any news comes

Q-7, Where can I see PU vs CIN Live Score today match?

A-7, You can see PU vs CIN Live Score on the Possible11.com website, and the possible11 app.