Team needs some more runs from Nos. 8-11 in England; Day 4 also washed out

Tears poured down for Brand Test Cricket from the skies above the Hampshire Bowl on Monday, leading to no play on Day 4, the second day of complete washout in the World Test Championship Final. The incessant rain also brought into focus the ICCs decision to shift the venue from London to Southampton, ostensibly since the presence of an on-site hotel would minimize the impact of the coronavirus.

While future tweaks to the WTC Final norms now seem a certainty, theres no cause for despair yet: the forecast is for some let-up in the rain over the next two days (yes, there is a reserve day), and there will be a possible six sessions and 196 overs to squeeze in the remaining three innings. New Zealand are now 101/2 in reply to Indias 217.

>Grey skies are expected and any sunshine will be good news for the Kiwi batsmen since the eventuality of a result will hinge on the bowlers engineering the sort of batting collapse the Indians suffered lower down the order on Day 3. An eventuality that may come back to haunt them in this game. 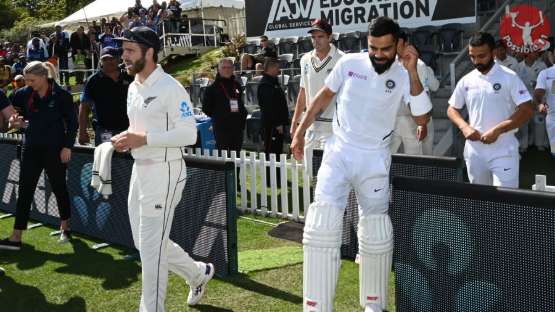 It would be a travesty if the fate of a two-year-long championships final is decided by rain. Considering rain can never be entirely ruled out in any country, perhaps a three-Test series would be a better and fairer way of deciding a Test champion.

At 2.27 runs per over, the scoring rate has been the slowest for any Test in the UK in this century, and some quick runs from the tail, like the sort R Ashwin got, would have been worth its weight in gold. Yet, Indias tail has been so poor when it comes to batting contributions overseas that the need for vital runs from the blades of Nos. 8, 9, 10, and 11 have even swayed team selection on occasion.

Once Ashwin fell for 22 to make it 205/7, India could add just 12 runs. Even with Kyle Jamieson, Trent Boult, and Tim Southee swinging it with venom and committing themselves to a fuller length, a par contribution would have been anything in the range of 20-40 runs. Ishant the blocker lasted 16 balls and 28 minutes for his four but he had been walking across to play deliveries which could have been left well alone. He eventually paid the price as a bouncing Jamieson delivery kissed the shoulder of his bat on the way to first slip. Bumrah at No. 10 lasted just one ball, near yorked in front of leg stump by Jamieson. Bumrah seemed so befuddled he forgot India had reviews left since it would have been worth a try to see if the ball was doing too much. Subsequently, his concentration disturbed by a sightscreen disturbance, Jadeja wafted at one down the leg from Boult straight into Watlings gloves.

India fell 33 short of their target of "anything above 250-plus" had said, but this has been part of a pattern. Since the start of the WTC cycle from August 2019, Indias Nos. 8-11have averaged just 14.65 from 18 Tests. There has been one hundred, again from Ashwin, batting at No. 8 against England in the second Chennai Test in February, and the stellar 96* in Ahmedabad from at No. 8 in the fourth. Both of these batsmen deserve to bat higher

Away from home, Nos. 8-11 have averaged 12.35 from 9 games, with Shardul Thakurs 67 in Brisbane being the notable recent exception, apart from Ishants 57 in Kingston and Jadejas 58 in Antigua (both 2019). Ishant averages 12.30 away from home in the WTC cycle, Shami 11.50. Since 2018 in SENA countries (SA, Eng, NZ, Aus), No. 8 onwards the batting average is just 11.08. Indian tailenders need to show more fight. If they could have managed 10-15 runs, it would have frustrated New Zealand. Now India have a lot of problems because they failed to post a good first-innings total, said former Pakistan batsman Ramiz Raza,

India will be hoping their fate wont depend on Bumrah, Ishant, and Shamis batting abilities during this six-Test long English summer