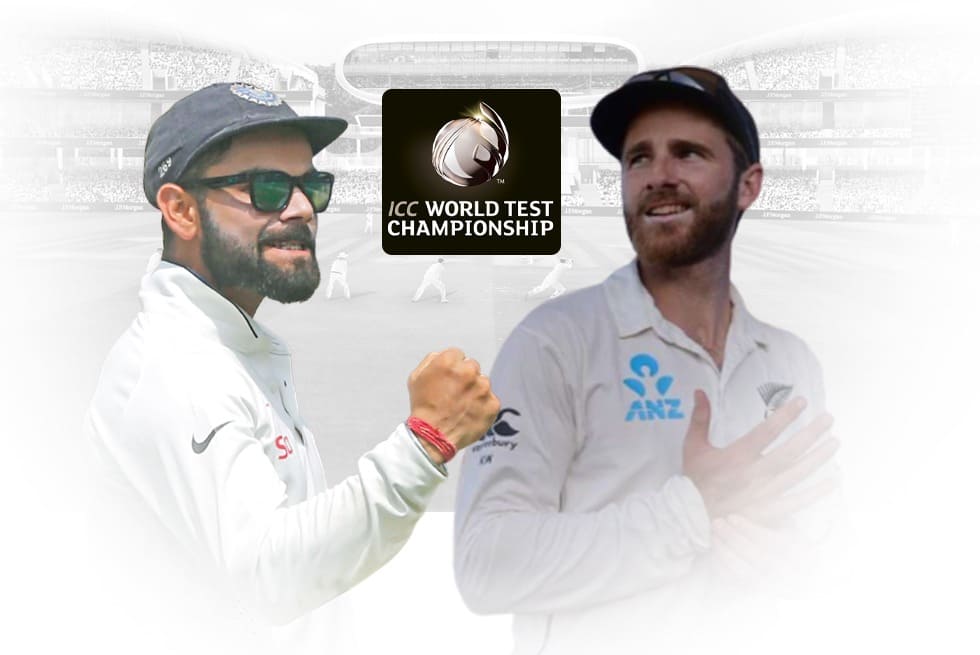 Both the teams boast of a world-class pace bowling unit but their head-to-head in ICC events and the overcast and cold conditions at the venue give New Zealand the edge in the final.

The moment has finally arrived! India and New Zealand, the two best teams in the inaugural edition of the World Test Championship (WTC), will clash in the final of the mega event in the port city of Southampton in southern England from Friday, the 18th of June. Both the units boast of a world-class pace bowling attack and very strong batting line-ups too. India has the advantage with their two spinners - R Ashwin and Ravindra Jadeja whereas New Zealand are better accustomed to the overcast and cold conditions predicted for the five days in Southampton. The other factor which gives New Zealand the slight edge is their head to head record against India in ICC Events.

India were the number one team in the WTC table and not only dominated at home but also won big overseas series in this time frame - their triumph in Australia in 2020-21 the biggest win of them all. India won 5 and lost just one of the six series they played in the inaugural WTC but significantly the one loss came at the hands of New Zealand in what was a 2-0 drubbing at home.

Rohit Sharma and Cheteshwar Pujara will be the key in the Indian batting line-up. A solid start at the top of the order is essential for success in England and Rohit - the best opener in the WTC in the world - will have to adapt to the conditions quickly and negotiate the new ball for India. It will mean a departure from his usual attacking self in India and he would have to leave a number of deliveries outside the off-stump in order to succeed in England.

Pujara had a middling tour of England in 2018 and would be looking to make amends this time around. Like in Australia, he will be the pivot who has to keep the innings together in England too. He would need to bat out time and overs and also whenever the opportunity allows cash in and score runs. The more time he spends in the middle the easier it will become for the lower-middle order against the old ball.

Virat Kohli has been in indifferent form in the last couple of years and scored just 288 runs in 12 innings at an average of 24 since November 2019. Which Kohli turns up for India - the one who looks slightly out of touch or the one who piled on 593 runs in 10 innings with two hundred in 2018 in England - will have a major impact on the outcome of the match.

Rishabh Pant and Ravindra Jadeja will be the two X-Factors for India in the lower-middle order. Pant has been the game-changer for India and produced high-impact performances in Australia and against England at home changing the course of a match and series with his counter-attacking destructive knocks. Jadeja’s batting has transformed completely since The Oval, 2018 and he is now regarded as one of the best all-rounders in the world across formats.

The batting prowess of Pant and Jadeja will allow India to depart from their usual strategy of playing six specialist batsmen overseas. Instead, they can go with the attacking option of playing the extra bowler. Irrespective of the conditions, India should play Ashwin as the fifth bowler in Southampton. His numbers in SENA have improved dramatically since South Africa, 2018 and he has also rediscovered his lost touch with the bat. He picked 4 wickets in the series opener in Birmingham in 2018 which included the wickets of Cook, Stokes, Buttler, and Broad. Ashwin then reduced England to 39 for 3 in the second innings getting rid of Cook, Root, and Jennings to end with 7 for the match - which remains his best performance in SENA.

Ashwin has also caused trouble to the New Zealand big 3 - he has removed Taylor 5 times in 6 matches, Williamson 5 times in 5 matches, and Latham 4 times in 4 matches. This should be another reason for India to play Ashwin in the final at Southampton.

Jasprit Bumrah and Mohammed Shami will share the new ball for India and there can be no debate over Ishant Sharma’s spot as the third seamer - not only is he the most experienced Indian pacer in the squad but has transformed into a world-class bowler over the last few years amongst the best in the world. He also has a decent record in England with 43 wickets in 12 Tests at a strike rate of 61.3.

New Zealand have had a great run in Test cricket since losing to South Africa at home in 2017. Kane Williamson has led the team with aplomb whose success has majorly been built around the phenomenal results achieved at home during the last two to three years.

New Zealand has tasted more success in England on their last two tours as compared to India - and this is where they have an advantage over their fancied rivals. They won the two-match series against a depleted England XI last week and drew the series in 2015. The conditions are expected to be cold and overcast with a lot of rain around the area and this is where the likes of Tim Southee and Trent Boult - the two swing bowlers in the New Zealand XI have the potential to run through the Indian line-up.

New Zealand also got invaluable match time before the mega final playing the two-Test series against England whereas India had to be content with intra-squad practice games.

Kane Williamson has been in the form of his life and will be the key for New Zealand at number three. However, they have two other Test specialists who can excel in testing conditions in England - opener Tom Latham and number 5 Henry Nicholls. Along with their skipper, these two have been the highest scorers for New Zealand in the WTC and have the ability to play out time and overs and grind out the opposition bowlers. In testing conditions, patience will be key and the two left-handers have that in abundance.

Southee will be the biggest threat for India, especially the openers and the right-handers. His ability to swing the new ball and get the odd ball to come back will make him a nightmare in helpful conditions - as he was at the Basin Reserve in 2020.

Given the cloud cover, New Zealand might just decide to go in with an all-pace attack which means that the Player of the Match from Birmingham, Matt Henry will make the XI along with Kyle Jamieson. Neig Wagner and Ajaz Patel are likely to sit out.

-The ICC Head To Head Factor

New Zealand have dominated India at ICC Events across formats and has an overwhelming 10-3 record. They have also won the last 5 ICC encounters between the two nations. They beat India by 10 runs in the World T20 clash in Johannesburg in 2007, again got the better of the fancied Indian side by 47 runs in another World T20 encounter in Nagpur in 2016, beat them by 18 runs in the semi-final of the World Cup at Old Trafford in 2019 and most recently defeated India 2-0 in the two-match series in the ICC World Test Championship at home in New Zealand.

India’s last win at an ICC event against New Zealand came in the 2003 World Cup when the Sourav Ganguly-led side overcame their opponents by 7 wickets at Centurion with Zaheer Khan producing a Player of the Match performance.

This ability to play above their potential in the big matches and collectively raise their game on the biggest stage against India gives New Zealand a big advantage in Southampton.

-To Watch Out For

Mohammed Shami had a decent England tour in 2018 and was unplayable on occasions especially at The Oval. A fuller length and line between the third and fourth stump and Shami might just run through the New Zealand line-up in favorable conditions in Southampton.

“They have got a fantastic attack. Brilliant, obviously a brilliant side. Throughout we have seen the depth they have as well, certainly saw that in Australia" - Kane Williamson appreciating the challenge posed by India in the WTC final.