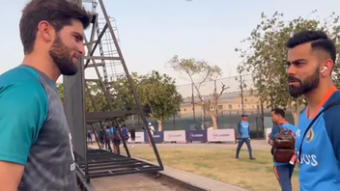 The Rivalry between India and Pakistan is all set to take center stage once again in the upcoming Asia Cup 2022. The rivals will start their Asia Cup campaign this year on August 28 at Dubai International Cricket Stadium. Asia Cup 2022, is set to commence on August 27 and many cricket fans are excited for the clash of Asian champions. India vs Pakistan match is one of the most sought-after clashes in the tournament. The India vs Pakistan match will take place on August 28.

When it comes to political relations, India and Pakistan are way too far from being called friends, but when it comes to cricketing affairs between the players of the two countries, things are far more cordial.

India vs Pakistan thriller, The Men in Bluelost to the arch-rivals in Dubai last year and that started the early end of their campaign in the ICC T20 World Cup. Fans would hope that the Indians can make amends and beat Pakistan to start the Asia Cup on a winning note. One of the biggest factors for Pakistans win last year was the opening bowling spell by premier paceman Shaheen Shah Afridi, who skittled Indias top order.

When Kohli, Pant and Rahul met with Shaheen Afridi

Afridi is out of action currently due to a knee injury sustained on the tour of Sri Lanka and will miss the match. He though is part of the squad and currently in the UAE, where all teams are practicing before the start of the tournament.

When it comes to political relations, India and Pakistan are way too far from being called friends, but when it comes to cricketing affairs between the players of the two countries, things are far more cordial. As India and Pakistan cricket teams prepare to begin their Asia Cup 2022 campaign in Dubai, a few Indian players met injured Shaheen Afridi on the sidelines of a practice session.

The GENTLEMAN Gesture from Indian Players

First leg spinner Yuzvendra Chahal met Afridi and the two shook hands and shared a laugh together. After that Indian batting legend Virat Kohli came up to him and inquired about his injury. The duo can be seen having a long serious chat. Later Afridi can also be seen meeting the likes of Rishabh Pant and KL Rahul.

Fans have showered a lot of love on a previous video where Kohli went up to meet Pakistan captain Babar Azam as the duo shook hands.

Shaheen Afridi , Despite being ruled out of the Asia Cup, Shaheen has travelled with the Pakistani squad to UAE for the Asia Cup. Shaheen was sitting on the sidelines as the rest of the members of his team toiled hard in the nets. The Indian cricket team also arrived at the training venue and seeing an injured Shaheen on the ground, the Men in Blue couldnt resist speaking to him.

The Pakistan Cricket Board said on Monday that Hasnain will travel directly from Britain to the UAE. He is currently playing in The Hundred tournament. Asif Ali, Haider Ali, Iftikhar Ahmed and Usman Qadir will leave for UAE early Tuesday. These players will replace Abdullah Shafiq, Imam-ul-Haq, Mohammad Haris, Salman Ali Agha and Zahid Mahmood in the squad. These players have not been selected for the Asia Cup.

Mohammad Hasnain T20 career, It is being said about Hasnain that he can prove to be more dangerous than Shaheen Afridi. He has the art of swinging the ball both ways just like Afridi. Hasnain has played 82 matches in T20 career so far. During this, he has taken 100 wickets in his name.