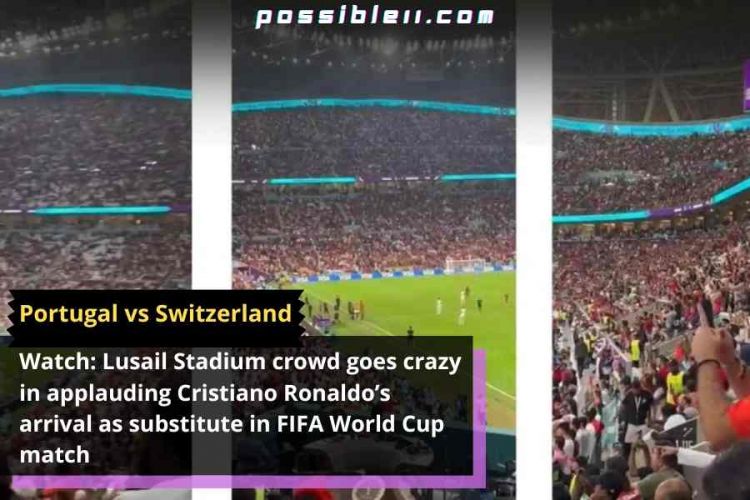 Cristiano Ronaldos international career appears to be coming to an end after he was benched for Portugals crucial FIFA World Cup 2022 Round of 16 match against Switzerland at the Lusail Stadium in Qatar. The former Manchester United attacker was replaced as the lone striker in Fernando Santos tactical plans against the Swiss by Benfica forward Goncalo Ramos. Many fans did not expect Ramos to impress, given that it was his World Cup debut and he had not played at all during the group stage. But the 21-year-old justified his selection with a hat-trick in Portugals 6-1 victory over Switzerland.

With Ramos stealing his thunder, Ronaldo received his fair share of attention during the build-up to the game, which increased in the second half when he was substituted in the 73rd minute. Ramos was replaced by Santos when Ronaldo arrived. While Ronaldo waited near the touchline, the crowds attention was drawn to the 37-year-old, and the former Real Madrid player received continuous applause for a few seconds.

Here is the video of the Lusail Stadium crowd applauding Cristiano Ronaldo:

Portugal have reached the quarter-finals of the World Cup for just the third time after 2006 and 1996, ending a run of five consecutive knockout games at the tournament without a win (Draw 1, Loss 4). (Draw 1, Loss 4). Meanwhile, this was also Portugal’s biggest ever victory in the knockout rounds of the World Cup, and even scoring six goals outside the group stages for the first time.

Meanwhile, Santos defended his decision to bench Ronaldo after the game. "I already explained it (the situation surrounding Ronaldos dismissal), and I would not explain it again," he told reporters. They are distinct players. It was a game strategy; all of the players are unique; I also launched Dalot and Raphael, but Cancelo is also a fantastic player. It was exactly what I expected for this match against Switzerland."

Cristiano Ronaldo is more than a football. The both Portugal and Switzerland fans are chanting the name of the GOAT.

“There is no problem between Fernando Santos and the captain of the national team (Ronaldo), we’ve been friends for many years. Players make decisions. Things do not affect us. I already explained, that part was completely resolved and he set a great example of a great captain”, he further added.