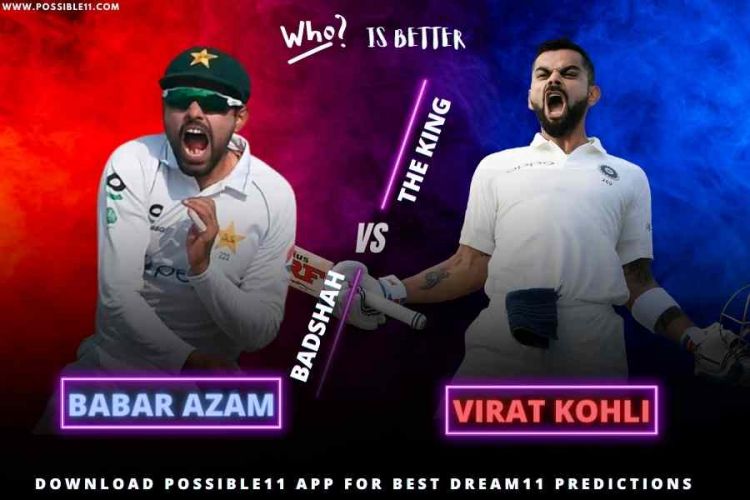 Two international batting stars in their prime have led their countries from the front. Virat Kohli was an earlier sensation, with his aggressive and carefree batting style and captaincy leading India to victories over almost everyone in all formats over the years. Babar Azam, on the other hand, instilled new hope in Pakistan cricket by setting new batting standards. Lets take a look at two of the modern cricket icons.

Kohli and Babar were both U-19 stars with big dreams. With India, Kohli won the ODI World Cup in 2011 and the Champions Trophy in 2013, while Babars only international victory came in 2017.

In this section, we compare B. Azam and V. Kohli across formats to see who has been the better batter in terms of numbers and stats.

In terms of Test cricket matches played and runs scored, Kohli is far ahead of Babar. He has scored 8074 runs in 102 Tests, while Babar has scored 3122 runs in 42 Tests. Although Virat and Babar have similar batting averages, Virat has scored 20 more centuries than Babar.

According to the statistics, Babar Azam is a relative newcomer to Test cricket, whereas Virat Kohli has won test series in Australia and England. Kohli has scored more runs and averaged more than Azam.

Before Babar made his ODI debut for Pakistan, Kohli had played in over 150 ODIs and scored 21 centuries. As of today, Kohli has scored over 12,000 runs in ODIs, while Babar is closing in on the 5000-run mark. Virat has scored 43 centuries in ODIs, compared to Babars 17 centuries in 92 ODIs.

Babar Azam is currently the No. 1 ODI batsman, having replaced Virat Kohli, who has been struggling with form recently. Both batsmen bat at No. 3 and contribute significantly to their respective top orders.

Virat Kohli is one of only a few players in the world to average over 50 in all three formats. According to the statistics, Kohli is far superior to Azam in T20Is, with a higher strike rate and a higher average.

This is where things start to get interesting. Babar has scored 2,065 runs in 66 matches since being named Pakistans T20I captain in 2019. Pakistans batter has hit two tonnes and 20 half-centuries during this time.

#OnThisDay in 2017, @imVkohli became the first-ever Captain in the history of Test cricket to score 6⃣ double centuries. ?

Babar Azam has reached the milestone of 1000 runs in Test cricket in Pakistan. Hes got there in just 14 innings and at an average of 91#PAKvENG #Cricket

In terms of Test cricket, Kohli has captained India in 68 Tests, winning 40 of them, losing 17 and drawing 11. Meanwhile, Babar took over as captain of the Test team in 2020 and has only played 13 Tests as captain, winning eight and losing three. Babar Azam was appointed as Pakistans Test captain relatively recently. Since the retirement of MS Dhoni, Virat Kohli has become the sixth most successful Test captain in history.