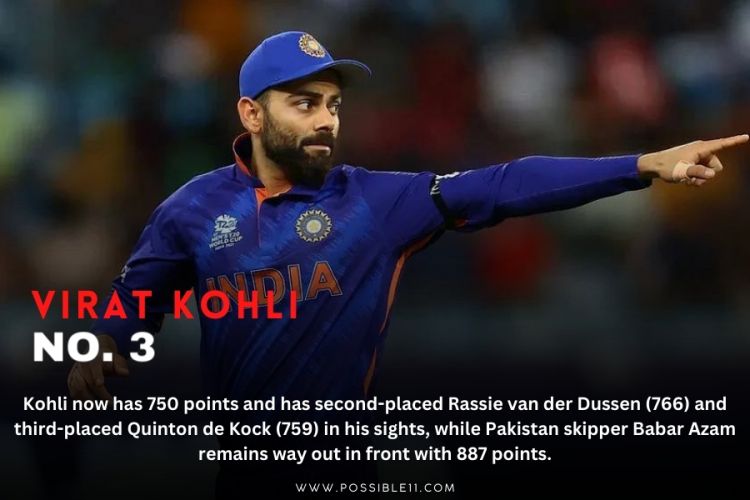 According to the latest ICC ODI rankings, released on Wednesday, Virat Kohli has jumped two places to re-enter the top five among batters. The former Indian captain's impressive performance in the recent Sri Lanka series, where he scored two centuries and 283 runs in three matches, earned him 750 points. He is now closely behind Rassie van der Dussen in second place with 766 points and Quinton de Kock in third place with 759 points. The current leader, Pakistan captain Babar Azam, holds a significant lead with 887 points. Kohli's teammates Shubman Gill, Mohammed Siraj, and Kuldeep Yadav also saw an increase in their rankings.

Kohli has scored three century in his past four one-day international matches. He made a great start to the year 2023, scoring his first century (113 off 87 balls) against Sri Lanka in the opening ODI before adding a second hundred (166 off 110 balls) in the third match.

In ODI cricket, Virat Kohli is on the verge of reclaiming the top spot as the batter. The 34-year-old is now ranked No. 4 among batsmen in the most recent ICC men's ODI player rankings after moving up four positions. This development occurs after he hammered his 46th ODI century and 74th international century in the third and final game against Sri Lanka on Sunday in Thiruvananthapuram.

Shubman Gill, Mohammed Siraj, and Kuldeep Yadav, who are teammates with Kohli, have all risen in the rankings. In addition to his fifty throughout the series, Gill added his first ODI century in India, moving up 10 ranks to 26th. 207 runs, or an average of 69, were scored by the youthful Indian opener.

Big change at the top of the @MRFWorldwide ICC Men's Player Rankings ⬇️https://t.co/Kv8kBeQ9wK

The most notable change is made by Siraj, who, with to his nine wickets throughout the series, jumps a whopping 15 ranks to third on the list of ODI bowlers.

Siraj rose to a career-best rating of 685 points to cut the gap on pacers Trent Boult (730) and Josh Hazlewood. During that series, no bowler took more wickets (727). Kuldeep was promoted seven spots to 21st in the most recent bowling rankings in recognition of his five wickets in just two games against Sri Lanka.