Virat Kohli lost his calm again and had a heated exchange of words with South African skipper Temba Bavuma during the first ODI match on Wednesday.

Virat Kohli may no longer be Indian captain in any format of the game but he hasn’t lost any of his aggression on the field. Before he scored a fine 51 with the bat in India’s chase in the first ODI against South Africa at Paarl, Kohli got into a heated argument with South Africa skipper Temba Bavuma over a throw that could have struck him.

Kohli, who was fielding at the short cover position, unleashed a throw towards the wicketkeeper’s end as Bavuma played a shot towards him. There may have been a small chance of a run-out, the South African captain wasn’t pleased with the force with which Kohli had thrown the ball towards his end.

Kohli was seen giving Bavuma a mouthful after the latter expressed his displeasure over a throw by the former Indian skipper, which denied Bavuma a chance to steal a single. The incident occurred in the 36th over, which was being bowled by Yuzvendra Chahal.

On social media, a video of the incident has gone viral. Kohli, who was positioned at the cover point, was seen having a word with Bavuma after the South African batter expressed his displeasure with the formers throw, which appeared to hit him on the pads. Kohli was seen giving it back to Bavuma, indicating that he had every right to throw the ball to the strikers end if the batter attempted to steal a single.

Fans reacted to the incident in their own way:- 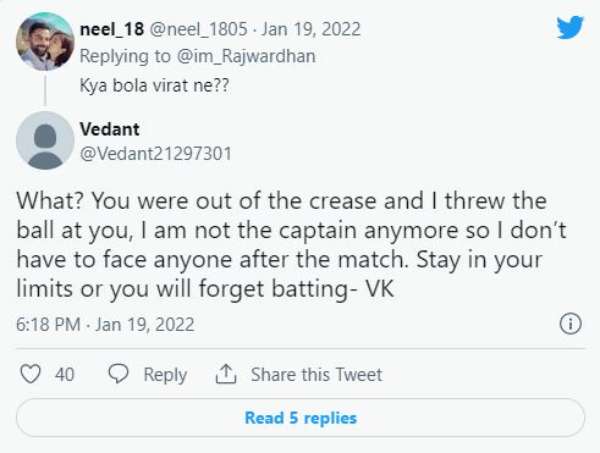