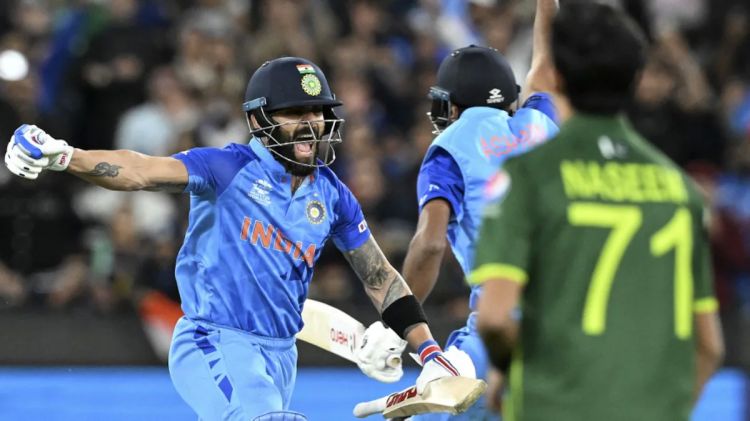 Sunday evening will go down in history as a thrilling win for Team India over archrivals Pakistan in the Super-12 match of the ongoing T20 World Cup at Melbourne Cricket Ground. With India on the verge of losing the game, Virat Kohli shone like a star, slamming 82 not out off 53 deliveries to help his team win the nail-biting game. India were 31 for 4 at one point in their chase of 160 runs, but Kohlis knock helped them win by four wickets. After the game, fans couldnt keep their emotions in check and celebrated Kohlis brilliant knock on Twitter.

Pakistan battled back from a shaky start to post a fighting 159 for eight. India finished the chase in the final ball, with Kohli and Hardik Pandya (40) scoring the majority of the runs after a poor start to their innings.

After falling to 31/4 at one point, the two revived India with a 113-run fourth-wicket stand.

As soon as India won, the social media platform Twitter was inundated with congratulatory messages for King Kohli.

.@imVkohli, it was undoubtedly the best innings of your life. It was a treat to watch you play, the six off the back foot in the 19th over against Rauf over long on was spectacular! ?
Keep it going. ? #INDvPAK #T20WorldCup pic.twitter.com/FakWPrStMg

Just ice cold from Kohli. What a player.

Geeze I don’t think I can ever recall a better game of T20 cricket than what we’ve just seen at the MCG. Amazing stuff from both teams. Virat’s dig one of a kind.??

Virat Kohli was at his spectacular best as he helped India to a victory over Pakistan in their T20 World Cup opener at the Melbourne Cricket Ground in Melbourne. Following the game, the veteran batter had a special message for his fans, which he shared on Twitter "A unique victory. Thank you to everyone who came out in large numbers."

Special win. Thank you to all our fans for turning up in numbers. ??? pic.twitter.com/hAcbuYGa1H