The Indian cricket team is currently playing the three-match ODI series against England at home. They have won the Test and T20I series against the visitors before this series. In the first ODI played at Pune, England won the toss and decided to bowl first. The hosts had a good start with openers Rohit Sharma and Shikhar Dhawan adding 64 runs for the first wicket.

Shikhar Dhawan and Virat Kohli played vital knocks for the Indian team at the top of the order. Dhawan scored 98 runs off 106 balls with the help of 11 fours and 2 sixes. India were at one stage struggling at a score of 205/5 but the debutant Krunal Pandya and wicketkeeper-batsman KL Rahul played displayed brilliant batting skills, in the end, to take the team over 300. KL Rahul smacked 62* runs off 43 balls including 4 fours and 4 sixes.

Krunal Pandya impressed everyone on his first-ever innings in ODIs scoring 58 runs off 31 balls. He smashed 7 fours and 2 sixes in his explosive knocks. With his fireworks, the left-hander created a big milestone as well. Krunal Pandya now holds the record for hitting the fastest fifty on an ODI debut. He took 26 balls to reach the 50-run mark and helped the team to reach the big total. His strike rate of 187.09 is also the highest for a debutant in ODIs with a minimum of 50 runs. 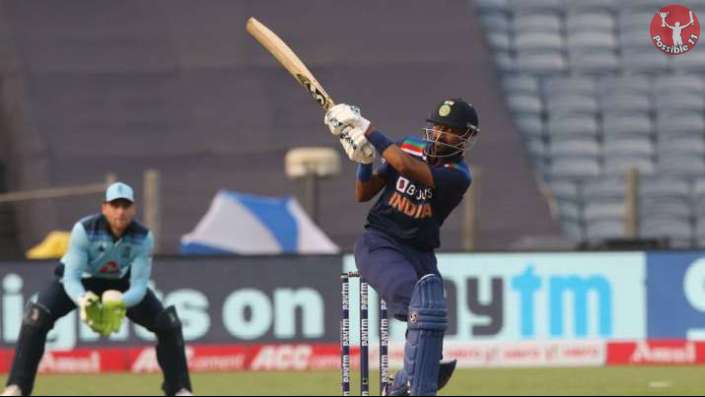 Krunal Pandya also became the first Indian player to hit a half-century while playing at number 7 on his ODI debut. Among the players making their debut in the 21st century, Luke Wright of England is at the second spot with respect to balls taken to complete half-century. The English player slammed fifty against India in 38 balls on his ODI debut in 2007.

Nasir Jamshed of Pakistan who made his debut in 2008 against Zimbabwe reached the 50-run mark in 40 balls. This takes him to the third spot in the record tally. The opener batsman scored 61 runs off 48 balls in this innings including 6 fours and 3 sixes.

Also Read:Deepak Chahar and Bhuvneshwar Kumar pull India out of jail to win the thriller

There are two players who are at the joint fourth spot in terms of this regard. Mohammad Rizwan and Sharjeel Khan both got their fifties in 46 balls on their ODI debuts. Rizwan smashed 67 runs off 58 balls with the help of 8 fours against Bangladesh in 2015. Sharjeel played a fine knock of 61 runs off 61 balls while playing against Sri Lanka in 2013.