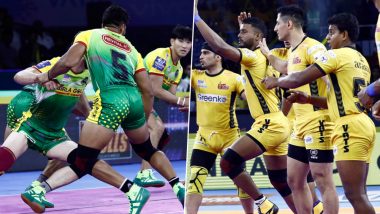 In match number 31 of the Pro Kabaddi League 2021-22 season today, Telugu Titans will go toe to toe with Patna Pirates.

It has been a season to forget for Telugu Titans so far as they are still searching for their first win of the season. The Titans are second from bottom in the points tally, while their opponents Patna Pirates have had it much easier. The Pirates are currently in fourth place, and they could potentially move up to second place with a win today.

The Telugu Titans will lock horns with the Patna Pirates in Match 31 of the Pro Kabaddi League 2021 on Monday. The Sheraton Grand Whitefield Hotel and Convention Center in Bengaluru will host this contest. The Telugu Titans are placed 11th in the points table with a couple of losses and draws each. They are the only team that hasnt won a single game in the ongoing edition of the Pro Kabaddi league.

the Patna Pirates have three wins and a loss from four encounters this season. They have 16 points against their name and will look to add more to their tally when they take on the Titans on Monday.

Siddharth Desai: Siddharth Desai had a tremendous 2018 edition, which made him one of the most expensive players in 2019. Desai has shown his class time and again and has been superb thus far with 34 raid points to his name. He missed the last game and expect a big game from the well-rested Bahubali of PKL.

Rohit Kumar: Rohit Kumar is a phenomenal raider and though he has integrated into theside slowly, he had a good last game, where he led the side, claiming 1 raid point and 2tackle points. He will be looking to power on from here.

Ruturaj Koravi: Ruturaj is an experienced defender and has settled in well at the Titans. The right corner defender is the top-scoring defender for his side with 8 tackle points to his name. He will be looking to curtail the threat of Goyat and Tanwar.

Monu Goyat: Monu Goyat had a couple of off games in between but has risen to the topof his game. The experienced raider was on fire in the opening game and has seemed to get that touch back once again. He has 31 raid points and 7 tackle points to his name, proving to be an all-rounder. He will be key to Patnas fortunes.

Sachin Tanwar: Sachin Tanwar is another big player in the Pirates set up and will look to replicate his form at Gujarat Giants. He has transitioned into an all-rounder and has put in strong performances. He has bagged 31 raid points and 5 tackle points.

Sunil: Sunil might not be the biggest name in PKL but is a very steady defender and gives nothing away. The right corner defender scored 55 tackle points last season and has started this season well with 11 tackle points to his name thus far. He will be looking to have another solid game.