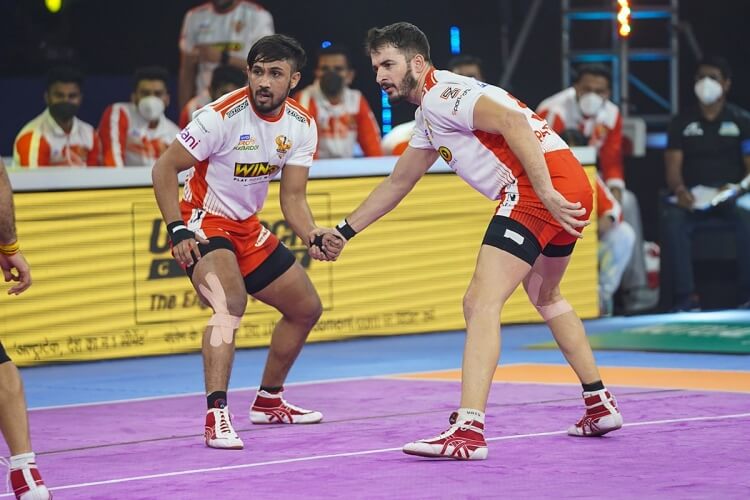 Tamil Thalaivas will lock horns with Gujarat Giants in the 129th match of the Pro Kabaddi League (PKL) 2022 on Friday, February 18..

Tamil Thalaivas have already been knocked out of the competition. They are currently placed 11th in the Pro Kabaddi points table with 47 points from 21 matches. The South Indian club has five wins and 10 losses thus far this season, with their remaining six games ending in draws.

The Thalaivas will play their last match of the season against the Giants on Friday and will look to finish their campaign on a positive note.

Meanwhile, the Gujarat Giants will need to win their last couple of games and hope the other fixtures go in their favor to make it to the playoffs.

With eight wins, as many losses and four draws this season, the Gujarat-based club are placed eighth in the standings in the ongoing edition of the Pro Kabaddi League.

Bhavani Rajput: Bhavani Rajput is an exciting, young prospect and with Manjeet expected to sit out, he will be the lead raider for Tamil Thalaivas outfit. The youngster has had a decent season thus far with 45 raid points to his name. He will be looking to make a mark tonight.

Surjeet Singh: Surjeet Singh is a leader in defense and has done a phenomenal job for the Thalaivas. The right-cover defender has featured in 20 games thus far and has registered 53 tackle points, which puts him in the top 10 scoring defenders this season. He will need to shoulder a lot of the responsibility tonight.

Sagar: Sagar is a solid defender and came into the limelight in the last season. The right-corner defender has been aggressive in putting up tackles and has taken his tally to 78 tackle points, which sees him at the top of the list of top-scoring defenders. He has been terrific over the course of the season, though his recent form has been poor, and would hope he can turn it around tonight.

Rakesh Sangroya: Rakesh Sangroya is a fine talent and has done a decent job lately. He has been among the points lately and has looked sharp. He has taken his tally for the season to 115 raid points, including 10 raid points in the last game, and will be key in this game.

Hadi Oshtorak: Hadi Oshtorak is a fine all-rounder but has mainly played the role of a defender. The Iranian has looked solid in the last couple of games, where he garnered 5 tackle points. He will have a big role tonight.

Parvesh Bhainswal: Parvesh Bhainswal is an experienced defender and has spent a good time with Gujarat Giants. He has been putting in some solid performances. The left corner defender is the top-scoring defender for the side with 47 tackle points to his name and is in fine form.