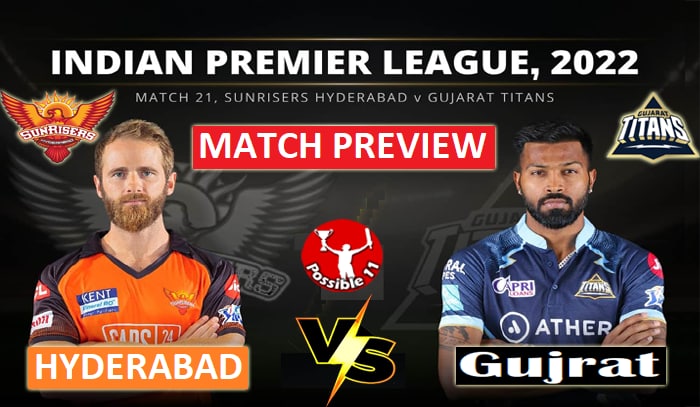 SRH vs GT: After a failure in the first two games for Sunrisers Hyderabad, skipper Kane Williamson got the start and will look to convert it into a big inning against Gujarat Titans. On the other hand, Gujarat with Hardik Pandya would like to maintain the winning streak.

A confident Gujarat Titans would look to continue this dream start on Monday with three consecutive wins in their Indian Premier League debut against Sunrisers Hyderabad, whose performances have not been consistent. Gujarat Titans have found momentum with consistent victories and in the match against Punjab Kings they showed that they can win under any conditions.

Skipper Hardik Pandya will have to show strategic dexterity against Sunrisers Hyderabad, who registered their maiden win against Chennai Super Kings but remain low on the points table. Gujarat Titans have got different match-winners in each match and the team would like to continue to improve in each and every match. Sunrisers Hyderabad, on the other hand, secured a win after starting a disappointing campaign.

Gujarat has not one but many match winners

At the DY Patil Stadium, the focus will again be on young Shubman Gill who is in top form and also scored his best score in IPL against Punjab Kings. The right-handed batsman, however, will need the support of Matthew Wade and Sai Sudarshan. While Wade has the ability to play big shots, Sudarshan played a useful inning in the last match.

In the previous match against Punjab Kings, Rahul Tewatia emerged as the match-winner by hitting two sixes, which must have boosted his morale a lot. Gujarat Titans will face last overs specialist Bhuvneshwar Kumar along with bowlers like Umran Malik, T Natarajan, and Washington Sundar. At the same time, there will also be variations of South African fast bowler Marco Yanson, which can be difficult for the batsmen.

Gujarat Titans bowlers have done well, with Hardiks four overs to change the course of a match while Lockie Ferguson is another fast bowler who can be dangerous and Mohammed Shami has also been effective with the new ball. Another important player for them is Rashid Khan who can present challenges to his former team Sunrisers Hyderabad.

Toss can change the course of the match

Living up to the confidence shown in himself, Sunrisers Hyderabad opener Abhishek Sharma played a match-winning inning of 75 runs on Saturday as the team chased down the target of 155 runs in 17.5 overs. He would also like to continue the same form. Rahul Tripathis role will also be very important and so will Nicholas Pooran and Aidan Markram. Along with showing consistency, all three will have to show their ability by taking responsibility in the middle order.

Sundar also has the ability to play small but important innings. Both the teams would not like to tamper with their combination. But considering the dew, the toss will be important, which has been proved in most of the matches before.

Gujrat Titans is looking in pretty good form, they are expected to win the match.

Who should be the captain and vice-captain in the SRH vs GT match?

You can make Shubman Gill the captain in todays match. He batted well in the last match. Looks like they are in good touch. Hopefully, he can be seen batting brilliantly in todays match as well. At the same time, you can take Washington Sundar as the vice-captain. He is an all-rounder and can do wonders with both the ball and the bat.