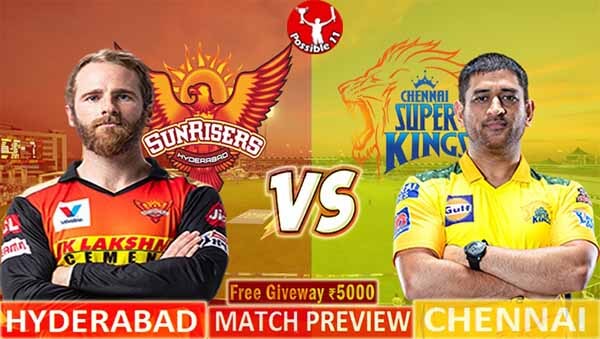 Almost out of the race for the playoffs, Sunrisers Hyderabad will look to maintain the winning streak in the previous match when they face top-ranked Chennai Super Kings in the IPL points table on Thursday.

Kane Williamson led from the front with an unbeaten half-century to help Hyderabad win after five consecutive losses. Sunrisers Hyderabad have lost eight out of ten matches.

Sunrisers team managements biggest decision was to drop aggressive opener David Warner, who has scored just 181 runs at an average of 24.37. This time Warner was dropped twice, under whose captaincy the team won the title in 2016.

With the speculation now rife over Warners future with Sunrisers, Williamson will have a bigger responsibility to improve the teams performance. England opener Jason Roy, taking full advantage of the opportunity, scored 60 runs and contributed significantly to the teams victory with nine balls to spare.

Siddharth Kaul, Bhuvneshwar Kumar, and Jason Holder also bowled well in the death overs and did not allow a single boundary in the last 17 balls. Took the wicket of Sanju Samson in the last over. Now Sunrisers will be hoping to win all four matches and the results of the other matches will be favorable but for that, they will have to wait for some miracle.

Williamson said after the win in the last match, Our performance has improved. Everyone knew their role. I want to see young players taking advantage of the opportunity and enjoying the game.

On the other hand, Chennai Super Kings, captained by Mahendra Singh Dhoni, have almost confirmed their place in the playoffs by registering three consecutive wins. Ravindra Jadeja, who scored 22 runs in eight balls, was the cornerstone of Sundays last-ball two-wicket win against Kolkata Knight Riders.

Faf du Plessis and Ruturaj Gaikwad have given the team a good start while Moeen Ali, Suresh Raina, and Ambati Rayudu also add depth to the batting. Gaikwad scored 40, 38, and 88 not out.

The weak link of Dhonis team

Bowling seems to be their weak link and Sunrisers can take advantage of it. West Indies all-rounder Dwayne Bravo was rested against Kolkata who will return in place of Sam Curran.

Bravo may return in place of Sam Curran

The teams performance in bowling has also been average. Dwayne Bravo was missed in the last match. Sam Curran was not that influential. Bravo may return in this match. At the same time, the command of fast bowling will be in the hands of Shardul Thakur, Deepak Chahar, and Josh Hazlewood. Moin will play Jadejas side in Spin.

SRH vs CSK: if you lose money in dream 11 then join our Telegram channel where we provide a winning team of every match