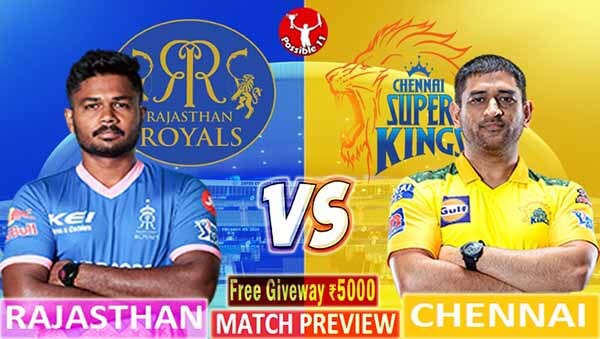 IPL 2021, CSK vs RR Match: Chennai Super Kings have already confirmed their place in the playoffs. Todays match for Rajasthan Royals is a do-or-die situation. Know the strengths and weaknesses and possible Playing11 of both teams.

Play-off-placed Chennai Super Kings will look to maintain the momentum by defeating in-form Rajasthan Royals to seal a spot in the top two of the Indian Premier League group stage. Mahendra Singh Dhoni-led CSK defeated Sunrisers Hyderabad by six wickets in the previous match to become the first team to make it to the playoffs.

Chennai currently has 18 points from 11 matches, followed by Delhi Capitals with 16 points and Royal Challengers Bangalore with 14 points. Kolkata Knight Riders have 10 points. The Royals have eight points from 11 matches and are seventh out of eight teams. Its a do-or-die match for him as losing it will kill all his hopes of getting into the knockouts.

They have to win the remaining three matches by a good margin which is not easy. First, he faces a tough team like Chennai, who defeated him by 38 runs in the first leg in Chennai.

Chennais spirits are high after winning four consecutive matches. They defeated RCB by six wickets and Kolkata Knight Riders by two wickets after beating Mumbai Indians by 20 runs. This was followed by a six-wicket win over Sunrisers.

On the other hand, nothing good has happened for the Royals this season. They were defeated by Delhi by 33 runs, Sunrisers, and RCB by seven wickets.The Chennai batsmen have impressed this season. Faf du Plessis and Ruturaj Gaikwad displayed great coordination while the middle order has excellent batsmen like Moeen Ali, Suresh Raina, Ambati Rayudu, Ravindra Jadeja, and Dhoni himself. Young opener Gaikwad has so far scored 40, 38, 88 not out and 45.

In the bowling, Josh Hazlewood, Deepak Chahar, Dwayne Bravo, and Shardul Thakur have handled the fast bowling well while the spin is in the hands of Jadeja and Bravo.

Barring skipper Sanju Samson and Yashasvi Jaiswal, no batsman could play for the Royals. All-rounders Chris Morris, Riyan Parag, and Rahul Tewatia are also not in form. Among the bowlers, Karthik Tyagi, Chetan Sakariya, and Mustafizur Rahman have done well but this seasons most expensive player, Morris, was disappointed.

Rajasthan team, which has hit a hat-trick of defeat

Rajasthan started off with a win in the current stage, but then the team faltered. RR suffered a hat-trick of defeats after winning by 2 runs against Punjab Kings. Rajasthan was defeated by Delhi Capitals by 33 runs, Sunrisers Hyderabad by 7 wickets, and Royal Challengers Bangalore by 7 wickets. Rajasthan, led by Sanju Samson, will now face a do-or-die match against Chennai. In such a situation, two changes can be seen in RRs playing XI. David Miller can come in place of Liam Livingstone and Shivam can play in place of Riyan Parag.

Will there be a change in Chennais playing-11?

Chennai beat Rajasthan by 45 runs in the first leg. Now Dhonis fanatics will once again be looking to give a big defeat to RR. Forgetting the disappointing performance of the last season, Chennais team is in excellent form in IPL-14. CSK has become the first team to make it to the playoffs. He crossed this path by defeating Sunrisers Hyderabad in the last match. Now Chennai will be eyeing to secure a place in the top two in the group stage by registering against Rajasthan. CSKs playing XI is unlikely to change.

RR vsCSK: if you lose money in dream 11 then join our Telegram channel where we provide a winning team of every match