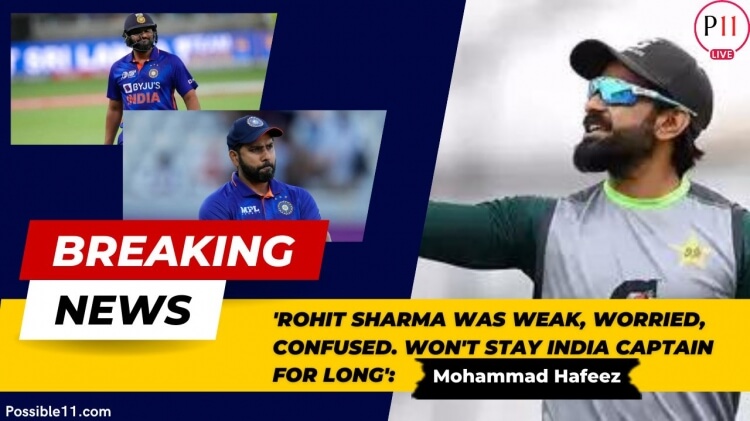 In an odd assessment of Rohit Sharmas leadership, Mohammed Hafeez claimed that the Indian openers demeanour when he entered the field for the toss suggested fear and confusion. On Wednesday, Sharma led India to victory over the affiliate team, securing their spot in the Super Fours round. In addition, the victory became the 35-year-31st olds in T20Is as captain, making him Indias second-most successful captain in the format behind MS Dhoni.

He also went onto predict that Rohit will no longer remain captain for a long time as he is not enjoying himself.India were not at their best but Suryakumar Yadav was, his 26-ball 68 paving the way for the defending champions’ 40-run victory over Hong Kong and entry into the Super 4 of the Asia Cup here on Wednesday. Suryakumar’s scintillating knock lifted a sedate India to 192 for two, the Mumbaikar easily overshadowing Virat Kohli’s fluent half-century after Hong Kong opted to bowl first.

“Look at his expression. This is Rohit Sharma’s expression after the game got finished. And they have won by 40 runs. His body language was weak when he came out to toss. I thought he was scared and confused. I can’t see Rohit Sharma whom I know. That Rohit Sharma who has played blinder of knocks,” said the 41-year-old ‘Professor.’

The former Pakistan all-rounder also claimed that captaincy is adding a lot of pressure on Rohit. Whereas, the supposed new approach from India is not reflected by their captain’s body language.

“Also, the pressure of leading India. He has been saying a lot of things about the brand of cricket, we will play positively… this and that, but it’s not reflected in the way the team is playing,” Hafeez claimed.

“It’s not reflected by his own body language. It’s easy to talk but to do it and show it on the field is difficult,” he maintained.

Hafeez then went on to make a major prediction regarding Rohit’s future as India’s captain and claimed that the latter will not be continuing to lead the side for long.

“He won’t continue as captain for long. His form and all things that are going on with him, from what I can see… I was also a captain, so if you are under pressure when leading the side. I have seen Rohit on a lot of occasions, he enjoys himself but now he is not expressing himself. A lot of things are going on in his mind, he is under pressure and I feel sorry for him,” Hafeez concluded.