Reactions To Gujarat Titans Winning IPL 2022 On Their Debut Season 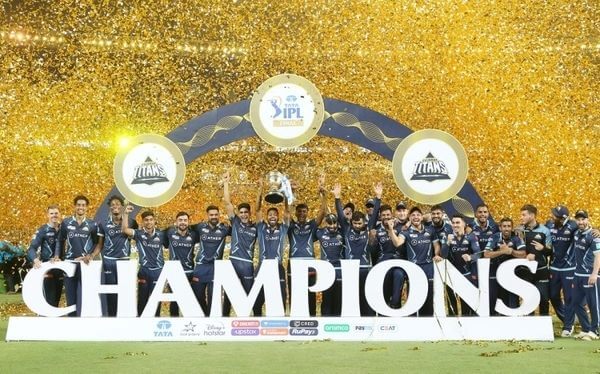 Only two sides have won the IPL in their debut seasons. They are Rajasthan Royals and Gujarat Titans. The two neighboring states came up against each other in IPL 2022 final on Sunday. While RR featured in their 2nd final after winning the inaugural trophy in 2008, GT were playing their first final in their debut season.

At the end of the contest, GT came on top. Before the tournament started no one gave them a chance. A bit similar to how it was with RR in the first season. RR had no big names. Shane Warne had not played much cricket before arriving at the IPL.

💬 💬 "It is the biggest achievement of your career."

Surprised everyone with their performance and won the IPL.

Gujarat Titans have taught all of us an important lesson of life. #GTvsRR #TATAIPL 2022 pic.twitter.com/2sm2VLmARC

What an amazing season by @gujarat_titans. To bring together a new group of players & gel so quickly speaks volumes of great leadership on & off the field. Wonderful to see a packed house, this is what we love the most about this competition, the fans. Well done to @BCCI as well

Tonight hurts, but we are SO proud of the entire #RoyalsFamily.

We are building something special, and well be back.

Where have we seen this before? 😉 pic.twitter.com/lF8mHajQLw

🗣️ 🗣️: @ShubmanGill hit the title-winning runs for the @gujarat_titans & here's how he summed up his emotions. 👏 👏#TATAIPL | #GTvRR pic.twitter.com/VXYeCXm4W9