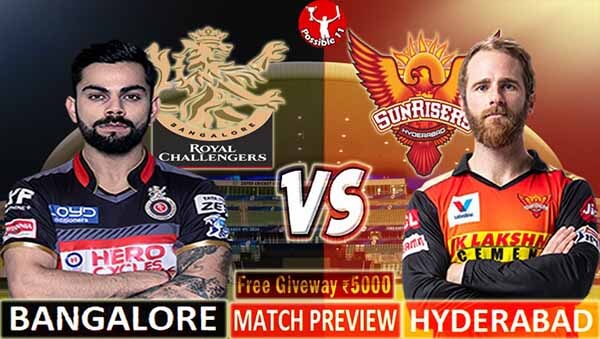 RCB vs SRH Dream 11 Prediction: Which player to bet on in the 52nd match of IPL 2021 between RCB and Hyderabad and who is the real match-winner?

In the 52nd match of IPL 2021, the teams of Royal Challengers Bangalore and Sunrisers Hyderabad will face each other on Wednesday. The match will be played at the Sheikh Zayed Cricket Stadium in Abu Dhabi. RCB are currently in third place with 16 points from 12 matches. Hyderabad has won only two out of 12 matches and is at the last position in the table. In the second leg, he has been able to register only one win in five matches against Rajasthan Royals. So far in IPL, Hyderabad and Bangalore have clashed 20 times in which Hyderabad has won 10 times. RCB have won eight matches while the result of one match did not come out.

A win over Sunrisers will boost RCBs morale ahead of their final match of the league stage against Delhi on Friday. If RCB wins both their matches, then they will get 20 points and have a chance to reach the top two. After losing to Kolkata Knight Riders and Chennai at the start of the second leg, RCB made a good comeback and made it to the playoffs after winning three consecutive matches. The team led by Virat Kohli will try to continue this winning campaign.

The last match was played between Chennai and Rajasthan on the Abu Dhabi pitch, in which a total of 379 runs were scored. Lots of runs here for the batters. A similar pitch full of runs is expected once again. Players will get some relief in the heat. The maximum temperature is expected to remain up to 34 degree Celsius.

Glenn Maxwell has been instrumental in the success of RCB this season. Maxwell has returned to his old colors, who know how to dominate the bowlers with the very first ball. This season he has scored 407 runs in 12 matches at a strike rate of 145.35.
Apart from this, Devdut Padikkal is also scoring a lot of runs. At the same time, there is no answer for Harshal Patel in bowling. In the current season, he is in first place with the highest 26 wickets. Captain Virat Kohli has high hopes for this bowler.

Undeterred by defeat, this team has many trump cards but at the moment none is running. However, he has got a young pacer named Umran Malik who can make a difference with his pace. Umran had bowled a few deliveries in the last match at a speed of over 150 kmph.
Hyderabad has nothing but to spoil the game of other teams. Barring Wriddhiman Saha, all the batsmen in the team are in poor form. Apart from Jason Holder, other bowlers dont seem to be able to bowl in the bowling.

Many records can be made in this match

De Villiers is one step away from hitting 250 sixes in IPL. If he can do this, then he will become the second player after Gayle to do this feat. Let us tell you that Gayle has hit 357 sixes in IPL. At the same time, Bangalores best bowler Harshal Patel is just two steps away from achieving a very special achievement in his name. By taking two wickets, Harshal will become the highest wicket-taker Indian bowler in an IPL season. He has so far taken 26 wickets in the current season. Let us inform that Bhuvneshwar Kumar (Year 2017) and Jasprit Bumrah (Year 2020) have taken 27-27 wickets in a season.

RCB vs SRH: if you lose money in dream 11 then join our Telegram channel where we provide a winning team of every match